Trastavere is the area located just south of Centro Storico, and on the opposite side of the Tiber. The district is characterized by cobbled and narrow streets with lots of people, old and beautiful small houses, and not least, a good selection of very good restaurants. There are also plenty of opportunities here if you want to take in some of Rome’s best bars, visit some of the finest medieval churches, and explore exciting small shops. Most hotels in Trastevere are small and affordable, and often have a capacity of well under 20 rooms in total. 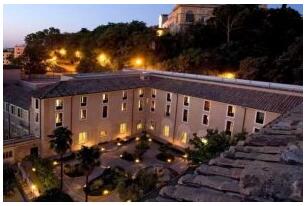 Donna Camilla Savelli is among the few accommodations in Trastevere with high capacity. This is a four star hotel with a very good standard, and with a total of 86 beautiful guest rooms. The hotel is located a little on the northern outskirts of Trastevere, right by the Parco del Gianicolo, and thus in a slightly greener setting. Here you can get the feeling of being somewhere in the countryside, instead of in a busy city.

Donna Camilla Savelli has a very good restaurant, bar and lounge, roof terrace and several outdoor areas to relax in. The hotel is very suitable if you want a quiet place for the night, without the distance to the center being too much. It is quite possible to walk from the hotel to, for example, Campo de Fiori, a walk that takes about 10 to 15 minutes. 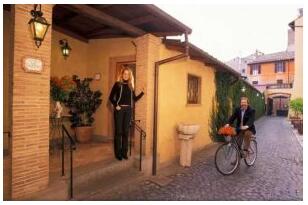 Hotel Santa Maria is a homely, small and romantic hotel in Rome that is rated with three stars. The 20 rooms are nicely decorated, air conditioned, and here too you can get the feeling of being more in the countryside than in a big city.

The hotel is housed in a pretty, low-rise brick building, which encloses a beautiful courtyard. In the courtyard it is nice to sit down with something to drink, or you can have breakfast here if the weather allows it.

Santa Maria has its own bar and lounge, rooftop terrace and breakfast restaurant. If you want to get around Rome by bike, you can borrow a two-wheeler for free at reception. The hotel is located in one of the finest districts of Trastevere, just beyond the Church of San Callisto. 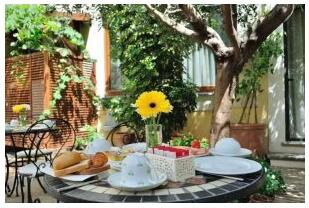 Relais Le Clarisse is a nice and simple three star hotel located in the center of the district, opposite Piazza Mastai, with the main street Viale di Trastevere in between. Here you get a great selection of affordable and good restaurants right nearby, and tram stops just around the corner if you want to enter for example Centro Storico.

The rooms have air conditioning, good and big beds, and large bathrooms. Relais Le Clarisse is otherwise known for its simple but good breakfast, where most of it is homemade.

Rome is Italy’s largest city, and the fourth largest in the EU. As one of the world’s most attractive cities, there are of course an impressive number of hotels in Rome. In 2017, more than 29 million overnight stays were sold in the city. In the number of overnight stays, only London , Paris and Berlin have more visitors than the Italian capital.

Price level for hotels in Rome

The average price for a hotel stay in Italy, for two people in a double room, is approximately 1,250 Norwegian kroner. In big cities like Rome and Milan , the average is naturally somewhat higher. At the same time, competition between hotels in Rome is fierce, which could push prices down in periods of less tourism.

It is quite possible to find very good and nice hotels, with good recommendations from previous guests, down to 1,000 Norwegian kroner per night for a double room. You can also spend well over 10,000 kroner on the best luxury hotels.

It is important that the hotel has air conditioning

It can get quite hot in Rome, both in spring, summer and autumn. If you choose a hotel without air conditioning, you can quickly regret it. Even in May, the temperature can reach over 25 degrees, and the same with September, and the beginning of October. August and July are by far the two warmest months, with temperatures of around 30-34 degrees during the day. The nights can also get quite hot.

Also, consider choosing a hotel with AC in the winter. In December and January it can get cold enough that your hotel room should have heating.