The History of Gabon


Tool finds indicate that the area that now constitutes Gabon has had settlement from far back in time, possibly dating back to 5000 years BC. The earliest inhabitants are believed to have been pygmies who lived by hunting and fishing.

In the 16th century, people from tribes belonging to the Myene language group settled in the area at the mouth of the Ogowe (Ogooué) River, while the pounou people moved from the Congo and settled in the southwest. In the same area, the Nazi and Tegue people also settled.

The dominant group of people in Gabon today, the people of captivity, migrated to the area from the east from the beginning of the 18th century, settling on the coast of ca. 1840.

Portuguese traders first came to Gabon in 1472 and named the area at the mouth of the Gabão (cap with hood) because of its special shape, and the country has been named after it. The Portuguese preferred the islands off the Gabon coast, but from there traded in Gabon, especially with ivory and wood. The ivory came from inland in Cameroon, while the slave trade developed with an export route from the south.

About. 1700 were also Gabonese slaves found on the market in the Ogowe Delta, where the Orungu and Nkomi kingdoms were founded. The slave trade was formally banned in 1815, but was practiced until the late 1800s. In the 18th century, the Dutch settled on the island of Corisco, and French mission stations were built in 1842–44. In 1843, the French built a fort on the north bank of Ogowe, and a colony for escaped and freed slaves was established. The city was named Libreville (“Liberty City”) in 1849. 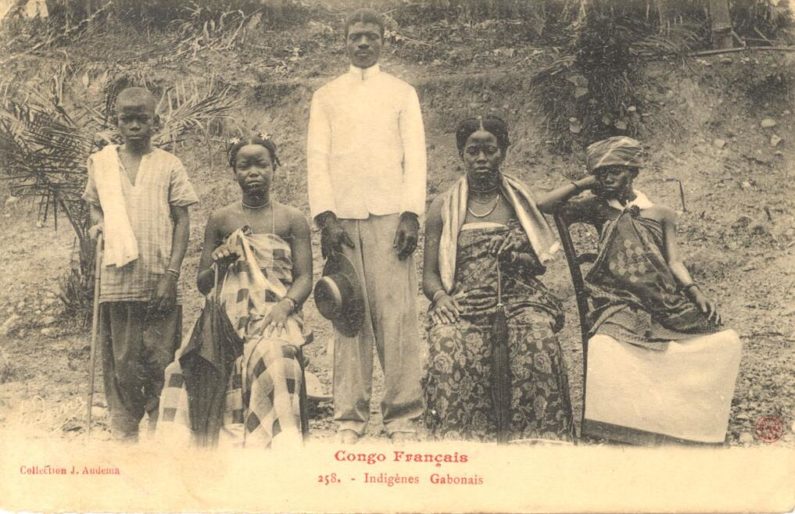 The French government appointed a governor of Gabon in 1886, and two years later became Libreville’s capital in the French Congo, with which Gabon was associated. In 1904 the capital was moved to Brazzaville, Congo. Gabon became a French Equatorial Africa colony in 1910.

Gabon achieved internal self-government in November 1958, with Léon M’Ba as prime minister. On August 17, 1960, the country became independent, and in February 1961, M’Ba was elected president, with 99.6% of the vote. He formed a coalition government and appointed his political rival Jean-Hilaire Aubame as Foreign Minister.

Prior to the new election of January 1964, M’Ba was deposed in a military coup, and Aubame was appointed leader of a Revolutionary Council that took over Gabon’s rule. M’Ba appealed to France for assistance under the defense agreement between the two countries from 1960, and after French military intervention, M’Ba was re-elected president. Elections were held in 1967 and gave M’Ba’s party BDG a majority. On the death of Léon M’Ba the same year, Vice President Albert-Bernard Bongo took over the presidential power. He established a one-party government in 1968 and formed the Parti démocratique gabonais(PDG) as the state-carrying and only permitted party. Bongo was elected president in 1973, 1979, 1986, 1993 and 1998; the first two times without a counter candidate. Until 1993, only PDG candidates could stand in the parliamentary elections (1973, 1979, 1985), and until the mid-1980s all political opposition was banned.

The opposition organized itself into exile, especially in France, with the Mouvement de redressement national (MORENA) as the leading group. Another Paris-based opposition group, the Union du peuple gabonais (UPG), was accused of supporting an alleged coup attempt in 1989. Another coup attempt was also unveiled in 1989, and these led to extensive arrests, which in turn led to increased resistance against Bongo’s regime.

The opposition was as much dissatisfied with the financial crisis management as opposition to the political system. In 1990 came a wave of strikes and demonstrations, initiated by students and workers. The actions helped set up a commission to investigate the introduction of democratic governance, and a national conference in March decided to introduce a multi-party system. This was accepted by President Bongo, and Casimir Oye Mba became prime minister during a transitional period until elections were held. Members of the opposition also participated in the new government.

In April 1990, there was considerable unrest when Joseph Rendjame, leader of the opposition party Parti gabonais du progrès (PGP), was found killed. Subsequent unrest prompted Bongo to declare the state of emergency and ask France for help. France sent troops to Gabon, officially to protect the 20,000 French citizens of the country. On May 22, the National Assembly passed a constitutional amendment enabling the transition to a multi-party system.

The election of a new National Assembly was held in 1990–91; the result was that PDG received 66 out of a total of 120 seats; seven other parties were represented. The main opposition parties were the Rassemblement national des bucherons (RD) and PGP. The 1993 presidential election was won by Bongo with 51.2% of the vote. In the election of a new National Assembly in 1996, the presidential party PDG gained a pure majority, with 85 out of 120 representatives; largest opposition party was PGP. PDG also became the largest party during the 1997 Senate elections.

Bongo was re-elected in 1998, with 66.6% of the vote; the two challengers Paul Mba Abessole from RNB and Pierre Mamboundou from the Haute Council of Resistance (HRC) gained 16.5% and 13.4% respectively. PDG retained its pure majority after the 2001 parliamentary elections; with 88 of the 120 representatives, against the RNB’s eight, as the largest of 8 represented opposition parties. In 2003, the National Assembly passed amendments to the Constitution that would allow President Bongo to run for re-election for another term, in 2005, from previously restricting one person to sitting for more than two terms. At the same time, the Election Act was changed to just one electoral round.

In 1996, an area in northeast Gabon was isolated after up to 30 people died after being infected by the Ebola virus; even more were reported killed. A new outbreak occurred in 2001, with 53 reported dead.

After independence, Gabon has maintained close links with the former colonial power France, with which the country has a military cooperation agreement. Among other things, this involves the stationing of French troops in Gabon, and France has twice intervened in favor of the incumbent president. After President Bongo converted to Islam in 1973, an approach was made to the Arab countries. Relations with France remained close in the 1990s, but were also marked by indirect criticism of President Bongo, which led to anti-French demonstrations and threats of sanctions against French oil interests that play a key role in Gabon’s economy.

Gabon is one of the foremost oil exporters in Africa, and the deposits of oil and gas in oceans with unclear boundaries have led to contradictions with neighboring Equatorial Guinea. Particularly, the dispute has been about the status of a group of small islands in the potentially oil-rich Corisco Bay, north of Gabon’s capital Libreville. The conflict has been going on since 1972, and escalated in 2003 when Gabon’s Defense Minister Ali Bongo Ondimba visited the islands and upheld Gabon’s demands on them. In 2004, the two countries agreed to leave the UN to find a solution to the issue, and in June an agreement was signed under UN supervision, allowing the two countries to cooperate on oil exploration in the disputed waters.

US interest in oil deposits in West Africa has led to a good relationship with Gabon, and President Bongo declared his support for the US fight against terrorism when he met President Bush in 2004. Gabon resigned in 1996 from OPEC in protest against low quotas and high rates membership costs.

In 2005, Gabon was named the African country that has the best environmental policy in relation to criteria in the International Environmental Sustainability Index. A multinational nature park, Tridom Park, comprises 7.5% of all rainforest in the Congo basin, distributed in Gabon, Congo and Cameroon. Relations with China were strengthened in 2004 following President Hu Jinto’s visit to Gabon; cooperation was particularly strengthened in the oil sector.

Especially in the 1990s, Gabon and President Bongo played an important regional political role as a mediator and resolver, including in the conflicts in Angola, the Central African Republic, the Republic of Congo, DR Congo (formerly Zaire) and Chad. Gabon has also been a driving force for increased economic cooperation in the region.