The First Presidential Elections in Egypt after Revolution 2011

The months before the parliamentary elections were marked by numerous large-scale demonstrations, squatting, sit-ins and violent clashes that flared up again and again, as well as daily strikes for better working and living conditions. Even after the parliamentary elections, there were repeated mass demonstrations and various protests by workers, students, government employees, doctors, journalists, lawyers, members of professional associations, political activists of all stripes and even police officers. Many of the protests were linked to specific demands such as the removal of functionaries of the old regime in state institutions, universities, professional associations, etc. as well as an increase in wages and an improvement in working conditions. Others were directed against sluggish reforms, blockades of the prosecution of exponents of the old regime, repression measures and military trials against civilians. Calls for minimum and maximum wages to be set and for Mubarak’s neoliberal economic policy to be turned away became increasingly insistent, which is also reflected in a visibly larger proportion of demonstrators from poorer classes.

The demands for justice for the victims of violence during the revolution in the form of condemnation of those responsible and compensation for families have been and continue to be put forward with particular emphasis. The legal processing of the corruption of the old regime and its human rights violations was blocked rather than encouraged. The authorities were charged with withholding or even destroying evidence, and in some cases with pressure on witnesses. Until the presidential elections, there was only one final judgment for the killing or ill-treatment of protesters.

On June 2, 2012, a court acquitted ex-President Mubarak and his sons of a number of corruption charges, but sentenced Mubarak and his former Interior Minister to 25 years in prison for failing to prevent the bloodshed during the revolution. The court also found that the security apparatus’ responsibility for the bloodshed could not be proven and acquitted six high security officers who had been accused. The ruling was widely viewed as political and military influenced. Hundreds of thousands of Egyptians protested in the streets and squares of the republic and called on the military council to immediately hand over power to a civilian presidential council. 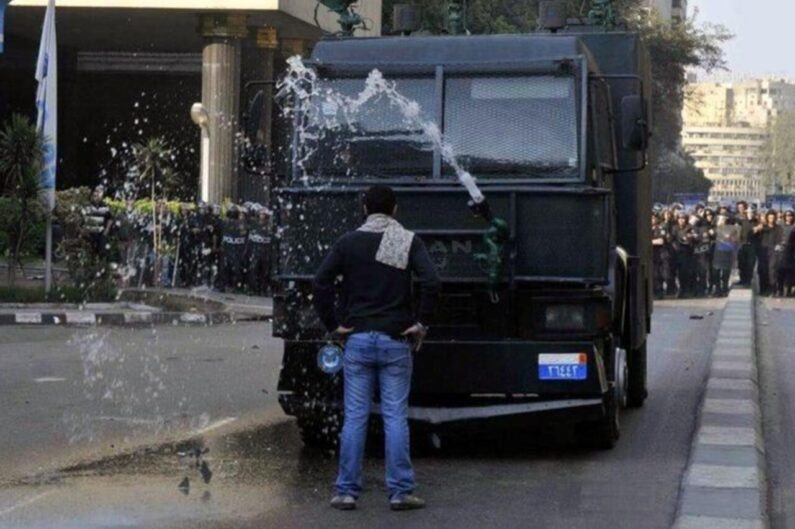 The first presidential elections after the revolution

Finally, under pressure from the streets, the Military Council decided to bring forward the presidential elections and hold them before a new constitution was drafted. The elections took place in two rounds in May and June 2012. The results of the first round of elections on May 23 and 24, 2012 came as a surprise to many. The two candidates who received the most votes, Mohamed Mursi and Ahmed Shafiq, were by no means considered to be the favorites among the top five candidates before the elections. In particular, the qualification of Shafiq for the runoff election was hardly expected by any observer. The revolutionary forces won 39% of the vote. However, their votes were split, essentially between two candidates, Hamdin Sabbahiand Abdel Moneim Abul Futouh, which meant that neither of them made it to the second round.

Information about the candidates and their election programs can be found on the following websites:

Doubts were raised that the elections had been tampered with through illegal voting by members of the security forces and other mechanisms. These doubts were never completely dispelled, as the electoral law passed by the Military Council gave the Electoral Commission absolute decision-making power without the possibility of objection in all matters relating to the election. The electoral commission had again refused to compare the data of the electoral register with the data of the security forces. After the first round of elections, there were mass demonstrations. The candidates assigned to the revolution initially declared that they would reject the runoff election and instead form a presidential council, but in the end broke off the confrontation.

For many Egyptians, neither of the two candidates who eventually ran off against each other was an acceptable alternative. Ahmed Shafiq represented for many the forces of the old regime and the candidate of the Muslim Brotherhood, Mohamed Mursi who have favourited Islamists. The latter tried to present himself as the candidate of the revolution, but refused to make binding agreements with secularist and moderate Islamic forces for future governance in order to mobilize the voices of the non-Islamist forces for itself. Frustration and increasing polarization led to great tensions before Morsi finally narrowly won the election with 51% and was sworn in before the constitutional court on June 30 as the first president after the revolution. On the same day, the Military Council formally handed over power in the state to him.

The election results of the first and second round are summarized in the charts below:

The election results need to be seen in context. According to ehealthfacts, many Egyptians wanted neither a representative of the old regime nor a Muslim Brother as president. Some of the revolutionary forces called for the elections to be boycotted or for invalid votes to be cast. In fact, turnout was relatively low for the first day and a half of the two-day election. In the last few hours before the polling stations closed, however, many decided to vote and the polling stations stayed open several hours longer than initially planned. This expresses the fact that for many Egyptians the runoff election was less a choice for their preferred candidate than a choice against the respective opposing candidate. Especially Christians but also many secular Egyptians feared an Islamist as president more than a representative of the old regime. Conversely, it was unthinkable for many Egyptians, including those with an extremely secular attitude, that after thousands of dead, injured and prisoners, a representative of the old regime should become president again. Before the election results were announced on June 24, 2012, seven days after the runoff election, the rumor mill was boiling. The whole country was extremely tense and fear of armed conflict in the event of Ahmed Shafiq’s victory spread. When the electoral commission finally declared Mohamed Mursi the election winner with 51.7% of all valid votes, the reactions were divided.

Background analyzes and interpretations of the election results can be found on the following websites: