On January 25, 2011, mass demonstrations began in Egypt demanding the overthrow of the regime. Millions of Egyptians took part in these demonstrations. They occupied central places in several Egyptian cities and successfully defended them against massive attacks by security forces and thugs. The protests ultimately led to the resignation of President Mubarak on February 11, 2011 and the temporary takeover of power by a military council of the Egyptian armed forces. He promised to hand over power to a civilian government after the drafting of a new constitution and the holding of parliamentary and presidential elections. Overseas these events are mostly referred to as an uprising, but for the Egyptians they are a revolution – in Arabic thaura – which is far from over.

The developments leading up to the revolution

The revolution surprised many people at home and abroad. But there were clear signs. Since the parliamentary and presidential elections in 2005, numerous strikes and protests have taken place to force the regime to implement fundamental reforms. But due to the gradual restriction of democratic leeway by the state, the influence of an increasingly polarizing Islamic discourse, the weakening of the labor movement in the wake of neo-liberal economic policy and the increasing alienation of the democratic opposition from its grassroots, hardly any changes could initially be implemented.

Parallel to the strikes, other social movements and new democratic groups formed. The Kifaya movement (“Kifaya!” = “Enough!”) Was founded in the run-up to the 2005 elections. It was directed primarily against the installation of President Mubarak’s son as his successor and called for political reforms and the abolition of the state of emergency. The April 6th Movement was founded in 2008 by young Egyptians in support of the textile workers’ strikes in the industrial city of Mahalla El Kubra. Bloggers and Facebook groups were looking for new ways to spread suppressed news and mobilize protests. The most famous group “We are all Khaled Said”is for a young Alexandrians, who in June 2010 in Alexandria in broad daylight in the street by security forces killed was named. He had posted a YouTube video showing police officers selling hashish. 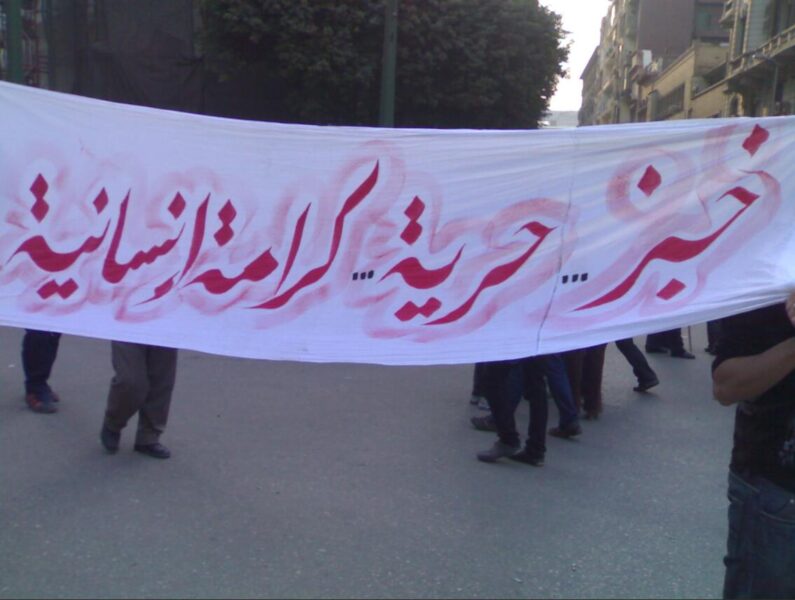 Social movements and democratic groups called for joint demonstrations on January 25, 2011. According to computergees, 80,000 Egyptians pledged their participation on Facebook, and calls and tips from a former police officer who was critical of the regime played an important role in the mobilization. The Tunisian revolution, which led to the resignation of Tunisian President Ben Ali on January 14, 2011, gave further impetus to the mobilization.

As a result of the demonstrations on January 25, central squares were occupied in Cairo and other cities on January 28, the “Friday of Wrath”. The police reacted brutally. Hundreds of people were killed in Suez, Cairo, Alexandria and other cities. Internet and mobile communications have largely been switched off these days. Despite these disabilities, millions of Egyptians from all walks of life and ages joined the marches. After January 28, 2011, the police withdrew completely from public space and left the cities to thieves, criminals and thugs, who, according to press reports, were paid by entrepreneurs and parliamentarians close to the old regime. Many prisons and their gun stores were opened. More than 1000 police stations were attacked, 99 of them burned down, and stolen many of the weapons stored therein. The events are documented in a 400-page report in Arabic by a commission of inquiry later commissioned by the new government. Amnesty International also has one report published on human rights violations during the revolution.

The army, which secured central locations and public facilities from January 28, 2011, refused to shoot demonstrators. Representatives from professional associations, universities and other civil society organizations joined the demonstrators. In the last few days before Mubarak’s resignation, there were nationwide strikes that largely paralyzed the country. On February 11, 2011, President Hosni Mubarak resigned. A military council took power. He declared the demands of the revolutionaries to be legitimate and promised to implement them and hold parliamentary and presidential elections within six months and then withdraw from politics. The newly elected parliament would draft a new constitution.

At least 846 protesters lost their lives during the 18-day uprising and more than 6400 were injured and some are disabled. The detailed sequence of events can be read in the live blogs or interactive time tables of various media, including:

Tahrir Square (= Freedom Square) in Cairo was also a place where democracy was practiced during the 18 days of the revolution. The demonstrators organized discussion groups in which each had a certain speaking time and was not allowed to be interrupted by the others. Chants, theater sketches, collective prayers and music groups determined the picture. Creative slogans denouncing yesterday’s Egypt and describing the dreams for tomorrow were shared together. Children cheered the demonstrators with slogans and were celebrated by everyone. There were also social activities, for example a school for street children.

Some of the many revolutionary songs can be found on YouTube with English subtitles:

The central goals of the revolution come from the main slogans “asch-sha’b yurid isqat an-nizam” (= the people want the overthrow of the regime) and “eisch, hurriya, ‘adala igtima’iya” (= bread, freedom and social Justice).

The protesters’ demands are as follows:

Many leaflets and other documents containing the demands and views of various groups can be found in the Arabic original and in English translation on the Tahrirdocuments website.