The Egypt Reign of President Morsi


In his first speeches, President Morsi tried to allay fears of the forced Islamization of society and of discrimination against Christians, women and minorities. The cabinet he appointed, however, was heavily criticized by many. Of the 33 cabinet members, 11 are considered Islamists, 12 held high positions under Mubarak, one belonged to the now defunct former ruling party NDP, five were already ministers under the Ganzouri government and four had a professional background in the security forces. Only two of the cabinet members are women, one of whom is a Coptic. The Prime Minister, Hisham Qandil, and the Vice President, Judge Mahmoud Mekki, are considered to be close to the Muslim Brotherhood.

According to ehistorylib, many had doubts about the extent to which the president would be able to pursue a policy independent of the military. During and shortly after the presidential elections, the military council and the judiciary enacted a series of laws, orders and court judgments, which many have called the military’s soft coup-d’état, as they guarantee the military extensive powers and opportunities to intervene. The powers of the president were given by a supplementary constitutional declaration issued by the Military Council on June 17, 2012, the second day of the runoff election. The declaration also gave the military certain veto rights in the constituent assembly. According to these rulings, the military is largely autonomous from government and parliament. The army’s budget and extensive economic activities are almost entirely beyond civil control. The order also required the consent of the military in deciding on war and peace as well as the filling of ministerial posts for strategic ministries such as the defense, foreign and interior ministries. It also gave the army influence on other crucial security issues through a defense council.

However, on August 12, 2012, just six weeks after his inauguration, President Morsi suspended the military’s constitutional declaration and sent the most important generals of the Military Council to retirement or other posts. The President issued a new Constitutional Declaration assuming the legislative power of the Military Council pending the election of a new Parliament, as well as the power to convene a new Constituent Assembly in the event that the controversial current Assembly is unable to draft a constitution. Observers disagree on whether these measures were taken against the military or in consultation with members of the military council. The latter is supported by the chairman of the military council, Hussein Tantawi and the chief of staff, Sami Annan, were awarded the highest medal in the country prior to retirement and were appointed advisers to the president. The other retired generals were given high pensions or attractive new posts.

Although many Egyptians were against the military’s continued ability to influence politics, they were also uneasy about the president’s substantial new powers. This unease increased in the period that followed, as the government made little effort to involve the other political forces. The so-called Nahda or Renaissance project, which, according to the election campaigns of the President and the Freedom and Justice Party founded by the Muslim Brotherhood, was supposed to bring about a new policy and the improvement of living conditions for all, remained vague and did not reveal any departure from the politics of Mubarak. General security hardly improved, prices rose, the supply situation remained tense and theEconomic and social policy did not set new accents. Political decision-making was criticized by many as not transparent and autocratic and the accents of politics as unclear and inconsistent with the demands of the revolution. More and more Egyptians wondered who actually made the decisions in Egypt: the president and the government or the Muslim Brotherhood.

When President Morsi issued a new constitutional decree on November 22, 2012, which not only granted him unlimited executive and legislative power until a new parliament was elected, but also immunized his decisions against any revision by the courts, the situation came to a head. Leading exponents of the opposition such as the former UN diplomat and co-founder of the Dustour (constitutional) party Mohamed El Baradei as well as the former presidential candidates Hamdin Sabbahi, Amr Moussa and Abdel Moneim Abul Futouh called for the declaration to be withdrawn. Hundreds of thousands demonstrated in all the major cities of Egypt against what they saw as the danger of dictatorship. There were violent clashes between Islamists and opposition activists, with several dead and tens of injuries. In the midst of the controversy, the Constituent Assembly passed the draft constitution after all secular forces gradually resigned from the assembly in protest against attempts by the Islamists to dominate the constitution. Despite the ongoing protests, now directed not only against the new powers of the president but also against the draft constitution, the president insisted on holding the referendum within two weeks of the adoption of the draft in the constituent assembly.

Most of the judiciary refused, in protest, to oversee the referendum, which was required by law. The referendum was therefore held in two rounds on December 15 and 22, 2012.

Only 10.5 million Egyptians or 31.7% of all eligible voters voted in the constitutional referendum – significantly fewer than in all previous elections after the revolution. According to official information, 64% voted “yes” and 36% voted “no”. In three governorates, ie Cairo, Gharbiya and Munufiya, the majority of voters rejected the draft constitution. The opposition is raising allegations of massive election fraud, and numerous individual lawsuits have been filed with the courts for irregularities in the election. 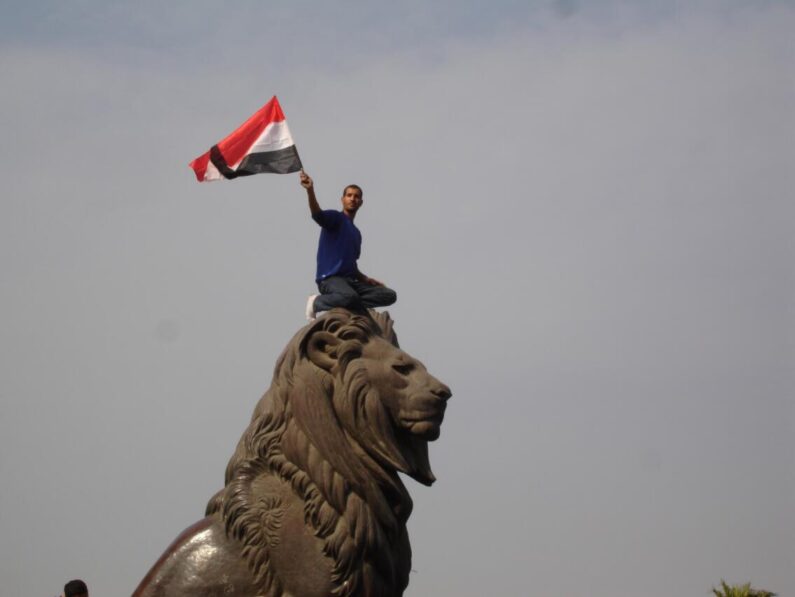 In January 2013, protests in Egyptian society increased. The poor economic situation in Egypt and the associated high unemployment as well as the attempts by the ruling Muslim Brotherhood Party to gradually Islamize the country were the trigger for huge and ongoing protests.

Army chief Sisi announced that the military would intervene if the political leadership did not find a political solution within 48 hours.

On July 3, 2013 at 5 p.m., this ultimatum had expired. Morsi is deposed from the military (supported by the majority of Egyptians) and the previously controversial constitution is repealed.

Adli Mansour takes over the office of President.

Abdel Fatah Al Sisi has been President of Egypt since June 8, 2014. At the end of March 2014, he announced his candidacy for the presidency of Egypt. He had to retire from the military to run in the elections. According to the constitution, only one civilian is allowed to stand. Al Sisi was Minister of Defense and Military Production under Prime Minister Hesham Kandil in the government of Mohamed Mursi since August 12, 2012.

It bothers the new Egyptian president that Islam is only perceived by the rest of the world as a source of fear and murder. In his New Year’s Address (2015) he pleaded for a new interpretation of Islam. He spoke at the venerable Al Azhar University in Cairo, the highest religious authority in Sunni Islam, which gave his words real significance.