The Dominican Republic is a republic in the Caribbean, and constitutes the eastern 5/8 of the island of Hispaniola, which the country shares with Haiti. Hispaniola is part of the Great Antilles, and the Dominican Republic has coast to the Atlantic Ocean in the north and the Caribbean Sea in the south. The country borders west to Haiti and east to the Mona Canal that separates Puerto Rico. The capital is Santo Domingo.

The Dominican Republic, which is a relatively poor developing country, is the Caribbean’s second largest state after Cuba and roughly the size of Finnmark County. The country is both mountainous and forest rich.

The Dominican Republic (name) is of Latin: ‘dominica’, ‘Sunday’, from Kristoffer Columbus ‘ brother Bartolommeo founding a colony (Santo Domingo) one Sunday in 1496.

The country is mountainous and intersected by four mountain ranges from east to west. Between the mountains are fertile valleys and plains. Pico Duarte, 3098 meters above sea level, is the highest mountain in the Caribbean. The country also has the lowest point in the Caribbean, the salt lake of Lago de Enriquillo, 44 ​​meters below sea level. Off the coast there are many small islands and lagoons. Four large rivers flow from the mountains down to the coast; furthest is the Yaque del Norte, 298 kilometers long. About 30 per cent of the land area is cultivated.

The climate is tropical maritime; the topography provides great variety over short distances. The annual average temperature is 25 o C and the temperatures vary little with the seasons. January and February are the coolest months and August is the hottest.

North-facing slopes have rainforests in most places. The flora is rich and there are many species of tree ferns, bromeliads and orchids. Most of the country has savanna. Cactus and thorn bushes grow in dry places.

By native land mammals are the highly endangered furrow tip mouse (haitialmaqui) and several species of bats. Humpback whales gather at certain times in Bahia de Samaná and the marine species of West Indian manate (lamantine) are found on the coast. The Spanish introduced cattle, pigs, donkeys, horses, dogs and cats. Mangust to fight rats was introduced from India.

Birdlife is rich with 254 species; 22 are endemic (native). There are 411 species of reptiles, including alligator and rhino horn. There are several species of sea ​​turtles. None of the snake species are poison snakes.

The Dominican Republic has a multi-party system. A president is elected to the general election for four years without the possibility of immediate re-election. The president appoints the government, has the supreme executive authority, implements laws, appoints governors to the provinces and is commander-in-chief of the armed forces. The National Assembly consists of a Senate with 32 members and a Chamber of Deputies with 178 members. Members of the two chambers are elected in the general, direct election for four years.

The country is divided into 31 provinces, each governed by a governor, as well as one national district ( Santo Domingo ).

The defense consists of navy, air force and army. Military service is voluntary. In addition, there are semi-military national police forces.

There has been great emigration to the United States. More than 700,000 people have immigrated legally and illegally from neighboring Haiti to work on sugar plantations. Other immigrants have come from Puerto Rico, other Caribbean islands, the Middle East and East Asia.

95 percent of the population goes to the Catholic Church. These are Protestant and Jewish minorities.

The language is Dominican Spanish with some loan words from the Arawak language. 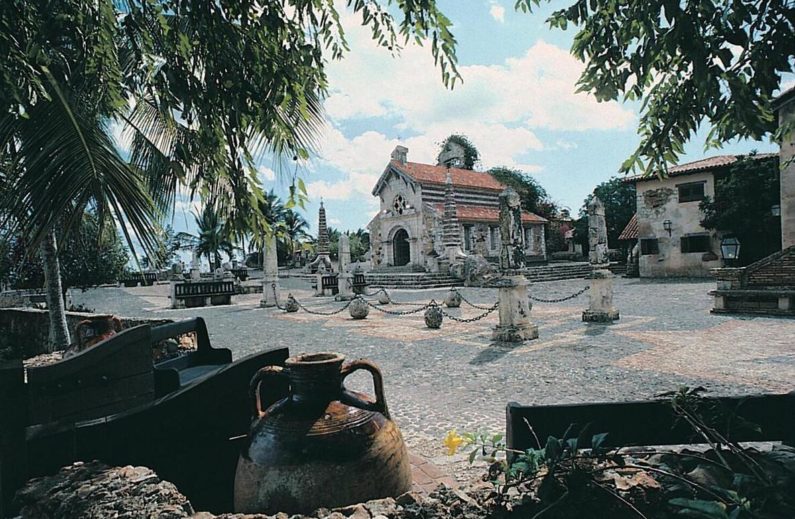 The first people came to Hispaniola around 5000 BC Arawak- speaking Tainos immigrated from northeastern South America approx. 650 AD Hispaniola consisted of chief judges when Kristoffer Columbus arrived in 1492. Brother Bartollomeo Columbus founded Santo Domingo as the first permanent European colony in the New World. A few years later, the number of tainos had been greatly reduced due to diseases, including chickenpox and measles, which the Europeans brought with them.

Hispaniola was divided between France, which got the western part of Haiti, and Spain, which got the eastern part of the island under the name Santo Domingo. This section was declared independent for the first time in 1821, but was invaded by Haiti the following year. In 1844, the eastern part detached itself from Haiti as the Dominican Republic. Since that time and until a few years ago, the country has been governed by dictators.

Due to internal turmoil and strong German influence in Haiti, the United States conquered the Dominican Republic in 1916 and took control of the country until 1924. Officer Rafael Trujillo seized power after the election fraud in 1930 and imposed a ruthless dictatorship. 20,000-30,000 Haitians living on the Dominican side of the border were killed in October 1937. Trujillo ruled until he was assassinated in 1961.

The US feared a revolution in Cuban patterns. In February 1963, leftist Juan Bosch became the country’s first democratically elected president, but was overthrown in September of that year. The United States intervened with troops to avoid the creation of “a second Cuba”. US troops left the country after Joaquín Belaguer became president in 1966. His reign was marked by the suppression of human rights and more than 11,000 killed by 1978. He was president again in 1986-96, and Leonel Fernández Reyna took over as president.

Reyna ruled until 2000 and again 2004-12. After strong inflation, unemployment, banking scandal and political turmoil, Reyna brought the country’s economy back on track. The Dominican Republic is still one of the poorest countries in the Caribbean, and there is a growing gap between the poor and the rich. President since August 2012 is Danilo Medina Sánchez.

Agriculture used to employ most of the population, but in recent times the service sector has taken over as the largest employer with around two thirds of employment (2012). The tourism industry is growing rapidly and is regarded as the country’s most important source of income. The Dominican Republic is the most visited tourist destination in the Caribbean.

Important export products are sugar cane, coffee, cocoa and tobacco. After 2012, mining has become a more important part of the economy, with gold and silver mining. Most farmers run modest self-storage farms. Production of beef is for domestic consumption. Coastal fishing is modest.

Schooling is free and compulsory for children between 6 and 14 years. High school is 4-year-old. 11 per cent take higher education. There are a number of universities and colleges; most are private. About. 13 percent of the adult population is illiterate.

A literature of its own did not exist until the Dominican Republic became independent in 1844. The literature of romance was introduced by the lyricist Manuel María Valencia (1810-70). Salomé Ureña de Henríquez (1850–97) was a great female lyricist. A literary main work is Manuel de Jesús Galvan’s novel ‘Enriqullio’ (1878–82) and Tulio Manuel Cesteros ‘La Sangre’ (1914). Ramón Morrero wrote about the conditions on sugar cane plantations in the novel ‘Over’. Former President Juan Bosch (1909-2001) is considered one of the country’s foremost short story writers. Julia Álvarez (1950–) writes poems, short stories and novels. Well-known playwrights are Manuel Rueda (1921–99) and Franklin Domínguez (1931–).

‘Areito’ was a Native American dance, but no tunes are preserved. Folk music has Spanish and African roots. Juan Francisco García (1892–1974) composed symphonic music with elements of African folk tunes. ‘Merengue’ is considered the Dominican national dance and the lyrics are often satirical. In recent years, ‘bacheta’, a form of music and dance that originated in the countryside, has great support. Salsa music and Dominican rock are popular.

Every February there is a carnival with parades, street dancing and music in Santo Domingo.

Painting art developed with motifs related to historical scenes and national independence. In the 1940s, the European influence on Dominican art was strong and inspired Dominican artists to a more international perspective on art. Later, more emphasis was placed on non-figurative and abstract expressions. Well-known modern painters are Paul Giudicelli (1921–65), Gaspar Mario Cruz (1925–2006) and Ramón Oviedo (1927–).

In Santo Domingo lies the first castle, cathedral and fortress as well as the first monastery in the New World.