About 62 percent of the population is considered Christian, of which about 43 percent are Orthodox, about 18 percent are Protestants and 0.6 percent are Catholics. Muslims make up about 34 percent and about three percent belong to traditional African religions. Previously, there was also an Ethiopian Jewish minority, Falasha, who was largely evacuated to Israel 1979-1991. Islam has traditionally been suppressed in Ethiopia, but since the change of power in 1991 has experienced a flourishing and visibility, among other things, in the construction of mosques across the country.

The Ethiopian Orthodox Church (Amharic : Y ‘ ityop’ya Orthodox tawahedo beta krestyan) is Ethiopia’s largest religious community. The Christian church in Ethiopia was founded all in the 300s. Christianity became a state religion about 350 under the Egyptian (Coptic) church in Alexandria, thus following the monophysitic teachings. The Patriarch of Alexandria elected and ordained the Ethiopian Orthodox Church Chief until 1959, when the Ethiopian Church gained its independence and its first Ethiopian Patriarch. The Orthodox Church gradually isolated itself from the rest of the Christian world, which led the Church to develop some peculiar dogmas. The Jesuits tried to get the church under the papacy in the 16th century, but had to lose a conservative priesthood that opposed any change.

The Bible of the Ethiopian Orthodox Church also includes the apocrypha. The language of worship is the old national language geez, which is no longer spoken. The church year has a number of holidays dedicated to the church saints, and a total of 250 fasting days, where you refrain from eating animal products. There is also a strong Jewish influence, expressed through circumcision of boy children, abstinence from pork, and the practice of Saturday as a public holiday. Another important aspect is the legend that the Ark of the Covenant was moved to Ethiopia and is said to be in Our Lady Mary of Our Lady Mary of Zion in Aksum. All Orthodox church buildings have a “copy” of the covenant sheets – and this constitutes the most important sacred element of the churches.

The revolution in 1974 put an end to the status of the state church as a state church, and it lost most of its large land. The church’s situation improved after the political change of power in 1991, but has had to find itself equated with Islam and Protestant Christianity. As more and more Orthodox moved to the Protestant churches, a dominant internal reform movement gradually emerged: Mahibere Kidusan. It aims to strengthen the teachings and traditions of the Orthodox Church among younger generations. 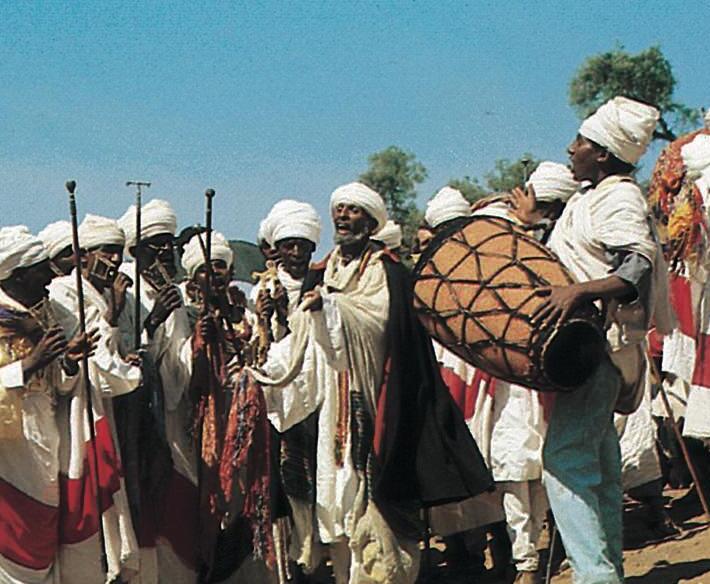 Religion Ethiopia. Singing and dancing priests from the National Coptic Church. In their hands they hold prayer rods and sistrum, a percussion instrument.

The first contact between Islam and Ethiopia was already in 615; seven years before the official establishment of Islam. Prophet Muhammad’s first followers experienced fierce opposition in Mecca and were therefore sent to Aksum, where the Christian king gave them protection. This remained an isolated episode, and it was not until the 7th century Islam established itself; in the north along the coast of present-day Eritrea and in the south along the Somali coast. During the following centuries, Islam spread into the country, where several Sultanates were formed. The most important ones here were Shoa, Ifat and Adal. From the 1300s, competition for trade routes led to constant conflicts between the Muslims and the Christian kingdom, culminating in the war with Ahmad ibn Ibrahim al-Ghazi (usually called Ahmad Gragn) from 1529 to 1541. Al-Ghazi’s defeat ended Islam as a political threat to the Christian kingdom and ensured the dominance of Christians.

In the centuries leading up to modern times, Islam was in the shadow of the dominant Christian power elite, and it was not until after the 1974 revolution, when the Ethiopian Orthodox Church lost its position, that the Muslims gained some recognition. This changed radically in 1991, when a new policy opened to full religious freedom. One result of this was the revitalization of Islam and a new activism driven by various reform movements. These movements criticized traditional Islamic practices, which in turn led to tensions internally among Muslims and between Muslims and Christians. The authorities allegedly saw a radicalization of Islam in Ethiopia, and attempts at control led to confrontations between Muslims and the authorities from 2011 to 2013.

The Lutheran Ethiopian Evangelical Church Mekane Yesus (EECMY) was the first Protestant church, formed in 1959. Meseret Kristos was established later that year, Qale Hiwot in 1962 and Mulu Wongel in 1976. Radio Voice Radio of the Gospel radio station was opened in Addis Ababa by The Lutheran World Federation as a support for missionary work across much of Africa (the Norwegian Sigurd Aske was a pioneer). The radio station was taken over by the government in 1977.

The Protestants, especially Pentecostal friends, experienced severe persecution during the Derg regime (1974-1991), but experienced rapid growth since the 1990s. In 1985, Protestant Christians made up about five percent of the population, while in 1994 it had risen to about ten percent. Today, Protestants make up over 18 percent, mainly in the southern areas. The Lutheran Mekane Yesus Church has over five million members and is the fastest growing Lutheran church in the world. The largest Protestant church is Qale Hiwot with over six million members. Establishing religious freedom in 1991 led to the emergence of a number of smaller Protestant churches, and today there are countless different denominations in Ethiopia – the vast majority of different forms of charismatic Pentecostal churches. 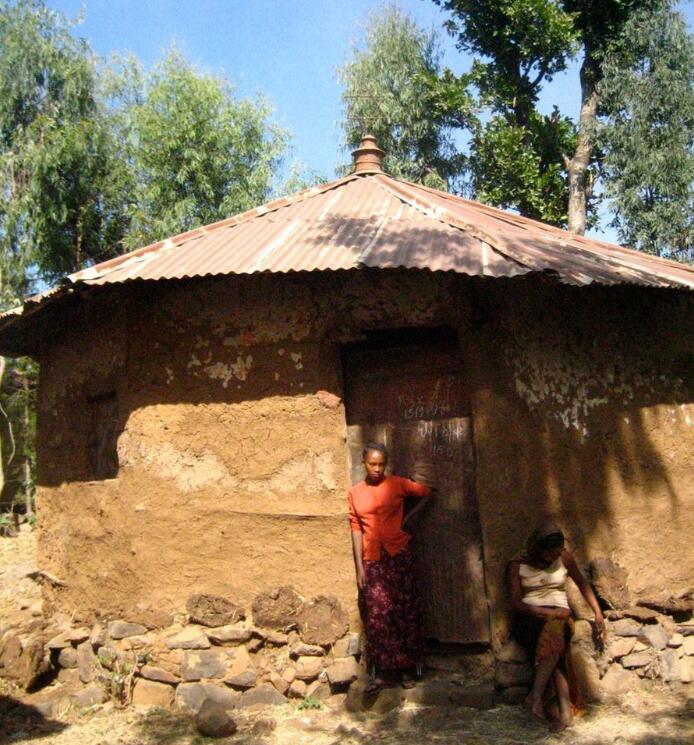 Synagogue in the village of Beit Israel in Ethiopia. Most of the country’s Jewish residents have emigrated to Israel.