Still today there is no definite information about this island either because it is impractical inside because of the wild vegetation, or because the natives, like the vegetation, continue to hold a hostile attitude towards the explorers and civilizers.

The very first explorations dating back to the early 16th century, carried out by the Portuguese, the Spanish and the Dutch, date back. According to Abbreviationfinder, an acronym site which also features history of Papua New Guinea, the best known of that period was the Spanish navigator Alvaro de Saavedra, who touched the island in 1528.

In 1605 the Dutch arrived who followed the southern coast of the island of Prince Federico Enrico. And the following year another Spaniard, Luis Vaez de Torres, sailed in that arm of the sea which he called by his name: Strait of Torres. The Dutch expeditions continued in 1625 and 1644 with Abel Tasman, the discoverer of New Zealand.

Towards the end of the seventeenth century the Englishman William Dampier led an expedition and then for half a century he no longer heard of navigations in this sense.

This led to 1768 to find on this island a European, the French LA de Bouganville and two years later the Englishman James Cook who reiterated what long before him had affirmed Torres, namely that the island was decidedly detached from Australia, and therefore could not be its continuation.

In the nineteenth century coastal explorations continued but also those inside began, made more and more difficult both for the impenetrable forest and for the hostility of the natives. The first crossing of the island was the work of the German Otto Ehler in 1895, but he lost his life there. The next two crossings, in 1896 and 1898, were both the work of the Englishman Sir W. Mac Gregor who, in addition to this, also made the ascent of the highest peak of the Owen Stanley mountains, more than 4000 meters.

Italian navigators and explorers in the 19th century were, on site, Cerruti, in the Gulf of Mac Cluer, and the two naturalists Luigi Maria D’Albertis and Odoardo Beccari. In the second half of this century, the Catholic missionaries of the Sacred Heart of Jesus, the Society of the Divine Word of Steyl and the Marist fathers also arrived. And after the Catholics it was time for Methodists and Lutherans.
With all this, New Guinea did not have a legal entity. But in 1828 it was heard that the British wanted to take over the whole southern part of the island. Immediately the Dutch occupied the southern and western coasts. Then in 1848 they affirmed their rights also in the north of the territory.

In 1878 Germany bought two coal stations located on the small island of the Duke of York, while private traders began settling east of New Guinea. When, however, the aspirations of Germany on the island in 1882 were known, Queensland began to move and occupied the whole non-Dutch part of the island, then gathered all the prime ministers of the Australian colonies at a conference in Sidney to ratify the situation created. Great Britain disagreed so Germany was able to continue its plans and on May 26, 1884 created the German Company of New Guinea. Then, made agreements with Great Britain, he proclaimed his protectorate on the whole north-east coast of the big island.

All this provoked such great agitation among the Australian colonies that Great Britain had to feel obliged to occupy the remaining territories, not taking into account the limits previously agreed with Germany. Between these two powers there were exchanges of diplomatic notes but then an agreement was reached, by which the partition of non-Dutch New Guinea had to be regulated by specific territorial limits. And this situation lasted until the outbreak of the First World War when, due to the impossibility of Germany to maintain possession of this area, she had to let Great Britain take possession of it.

Civilization work began, as far as environmental conditions allowed, almost prohibitive. And in fact in 1935, after the discovery of some gold mines, roads and airfields were built on the island. But certainly the territorial situation could not be considered suitable to accept modernly equipped armies. Yet in 1942 there were the first landings of the Japanese, preceded by significant aerial bombardments.

As much as Australians and New Zealanders did their best to block the Japanese march, they also continued their advance and reached about 50 km. from Port Moresby. And here came the powerful American contingents who decreed the end of the Japanese occupation, between December 1942 and January 1943. All the Japanese fighters who, encircled, were unable to escape, were killed but did not surrender.

Japan tried to send more reinforcements but in the seas of the Bismark archipelago they always found the Americans ready to destroy them. In May 1945, a few thousand Japanese took refuge in the jungle and remained there until the complete defeat of Japan.
With the Treaty of The Hague of November 2, 1949, the United States of Indonesia was established and New Guinea, although the Indonesian Republic claimed sovereignty, was not part of it.

In the following years there was not much progress in running this administration. The weak governments were formed by a corrupt ruling class, the people were kept at the lowest cultural levels with a percentage of illiteracy of 48% and with a growing spread of urban crime.

On September 16, 1975 Papua-New Guinea became independent and the first elections, held in July 1977, recorded the affirmation of the three main parties: the Pangu Party, the United Party and the Progressive Party. With the results obtained, a coalition government was formed between the Pangu Party, led by M. Somare, the Progressive People’s Party led by J. Chan, the Mataungan Association and the Bouganville Group.

Somare was premier of this government and immediately, contrary to what had been done during the Australian trust administration, decentralized the power so that each province could have a local administration. And this always given the difficulty of communication between one province and another.

In 1976 the island of Bouganville, which had already threatened secession, formed an autonomous government. Furthermore, the problem of corruption was in the political class of the serious country. Useless were Somare’s exhortations to politicians, with which he invited them to abandon their private affairs when they took over the government.

But in March 1980, after the umpteenth arrival of corruption cases, the Somare government fell and another one was established, chaired by Chan, secretary of the Progressive People’s Party, always a coalition.

In June 1982 the new elections reported to the Somare government but also this time, in November 1985, he had to abandon and always for the vote of no confidence due to corruption reasons. Fr. Wingti, head of the Democratic People’s Movement, then became head of the government. He also fought against corruption by setting up special government commissions.

But the results were the same as always. The elections were repeated again in 1987, Somare returned to the government, but shortly after was replaced by Wingti, again for the same reason, until in 1988 another coalition government came to power, this time led by R. Namaliu, leader of the Pangu Pati.

In 1993, a strongly repressive law was launched against growing crime. The consequence was a reduction of constitutional freedoms both of opinion and association.

In foreign policy, the country has always maintained excellent relations with both Japan and Australia, from which it has regularly received economic aid. Excellent relations have also been established with Europe, the United States, China and South Korea. With the Solomon Islands, a long-standing dispute over the arrangement of the respective territorial waters was settled in 1987. The only issue that has not yet been found a possible peaceful solution is represented by the Papua Independence Movement, residing in a region of Indonesia, which still demands detachment from it and the union with Papua-New Guinea.

In this regard, a Revolutionary Army of Bougainvillea had been established which, after taking part in numerous but bloodless demonstrations, in the 90s also started armed conflicts.

Meanwhile, the center-left Pangu Pati had remained in government until 1992 when it was replaced, and until 1994, by the center-right Democratic People’s Movement.

A slight improvement in the socio-political situation occurred during this period. Then in 1994 a new coalition executive was formed between the Pangu Pati and the People’s Progressive Party whose leader, J. Chan, who presided over it, immediately sought to settle the matter with the Bougainvillea Armed Movement. The followers of this Movement had decreed the interruption of mining production, with serious damage to the national economy. This is why Chan tried to negotiate with the secessionists by seeking an agreement.

Failed all attempts made, Chan used an army of mercenaries to defeat and subdue all the guerrillas. But he did not meet the popular favor at all and, in March 1997, also overwhelmed by large international protests, he resigned.

Legislative elections were immediately carried out in the following June which, although penalizing the parties of the previous coalition, did not, however, assign a clear majority to any other organization. So there was a new coalition government, this time composed of the Democratic People’s Movement, the Progressive People’s Party, the Pangu Pati and the National Congress. The leader of the latter, B. Skate, was the premier (while the Progressive Party in 1998 left the government). 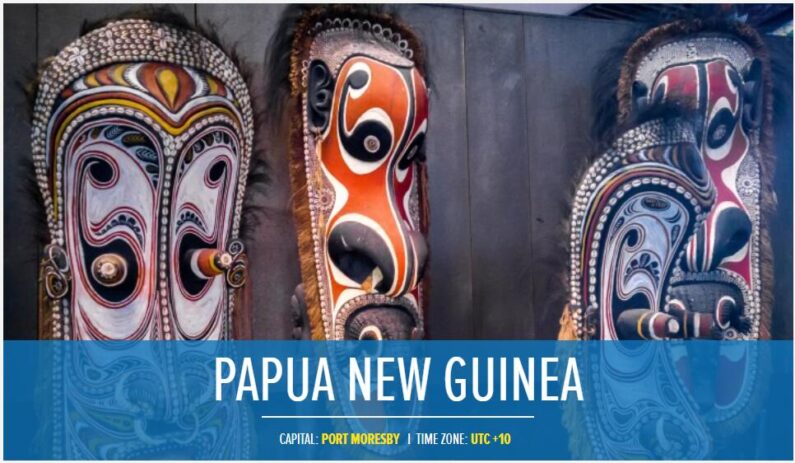 The top priority of the Skate government was the negotiations with the Bougainvillea secessionists. They began in July 1997 and it was not until January 1998 that 2000 representatives could sign an agreement to end hostilities. Who was not consenting at all was F. Ona, leader of the Revolutionary Army who continued the armed struggle. This helped to maintain tensions between Indonesia and Papua-New Guinea which, on the other hand, had strengthened economic and political relations with both Australia, Europe and the United States.

Also with the Solomon Islands tensions related to territorial waters were reduced, and also for this reason in July 1997 an agreement was reached that definitively established the maritime borders of each country.

In April 1998 Skate founded a new party: the Papua New Guinea First Party, born from the merger of the National People’s Congress, the Christian Country Party and other minor structures.

In October of the same year an amendment was made to the current Constitution. And with its approval, a government of reconciliation could be formed in the Bougainville area with the main task of preparing everyone for free elections. Not all independence leaders joined in this initiative.

Skate left the government in July 1999 and was immediately replaced by M. Morauta, head of the Democratic People’s Movement.