The indigenous people of New Zealand called their land with a beautiful name: “Ao tea roa” which means “long bright cloud”. And the name was actually suitable for a land surrounded by the sea, with a very mild climate, crossed by mountain ranges with sides rich in pastures for breeding and by the peaks covered by glaciers that provide it with a great wealth of water.

Yet such a hospitable land did not find its first inhabitants until the second century after Christ. They were dark-skinned men, called Moriori, from other islands of Oceania, and very primitive. They did not know agriculture and therefore lived on hunting, fishing and wild fruit. And they represented the only inhabitants of the country until the fifteenth century.

At this time other men arrived from the other Pacific islands: the Maori. They were skilled hunters and farmers, skilled in building wooden houses and fortified villages, and they were also strong warriors. The Maori, much more evolved than the Moors, soon managed to subdue them and then merged with them. Then, slowly, they occupied all the islands and at the beginning of the seventeenth century there were about 200,000 presences.

According to Abbreviationfinder, an acronym site which also features history of New Zealand, the first Europeans who arrived in the area immediately found themselves having to deal with these proud warriors. When Abel Tasman set foot on this earth in December 1642, he found himself in front of hundreds of these Maori who massacred some sailors. The rest of them, including Tasman, were quick to return to the lifeboats and their ships and so were able to let the world know about the presence of this land.

The second man to land on those shores, after the Dutch explorer Tasman, was the English captain James Cook, around 1769. And he too was greeted badly by the natives who took prisoners some sailors and even ate them.
At the beginning of the twentieth century, the population of New Zealand had reached about one million inhabitants, completely now civilized. The economy, based on agriculture, sheep and cattle breeding and the mining industry, was in continuous development.

In 1907, England, which had colonized this land, elevated it to the rank of “dominion”, that is, an independent state under English sovereignty. And in 1926 New Zealand still enjoyed other improvements: it acquired the right not to submit to the laws of the English Parliament and could declare war or conclude peace agreements with whoever it wanted, without worrying about what Britain thought. And since then he has always remained independent and autonomous, linked to Great Britain only by a feeling of formal subjection.

The elections of November 1935 assigned the victory to the Labor who thus constituted the government presided over by Savage.
The first government action was to bring the working week to 40 hours in all public employment. Then they thought about completely reorganizing the army for national defense purposes, without prejudice to voluntary service. A Defense Council was therefore established as a superior body headed by the Minister of Defense himself.

In 1938 the new elections confirmed Labor to the government, but they obtained a lower majority than the previous ones. The government passed a law, the “Social security act” with which it regulated health and social care for all categories of workers, for the elderly and sick and for pregnant women.

Then, with considerable timeliness, he was concerned with organizing the territorial defense and, regardless of what Britain envisioned, on September 3, 1939 he declared war on Germany, which then continued against Japan. New Zealanders and Australians were present in all British and American armies. After the war, New Zealand extended its diplomatic representations also abroad: first of all those of Washington and Moscow.

Then he made some nationalizations, such as that of the Bank of New Zealand, coal mines, airlines and then favored the campaign and the development of industrialization: the latter needed the immigration of specialized personnel who, in fact, came mainly from Great Britain and Northern Europe.

On December 8, 1947, Britain granted New Zealand to amend its Constitution according to the needs of its population.

With the general elections of 1949, the defeated Labor had, after 14 years, left the government to the conservatives of the National Party which restored the economy based on private companies and free competition.

The Parliament, operating through the House of Representatives alone, studied a project to establish the Upper House, for better task management.

In 1957 New Zealand saw its dairy production decrease and imports increase and, therefore, found itself in the midst of economic difficulties. And so in the elections of that year the Laborers had the majority again and W. Nash was able to reorganize the government which, first of all, imposed limits on imports.

The following year the signing of some commercial treaties with Canada and Japan led to a marked improvement in the economic situation with a rapid recovery.

Then, on October 1, 1959, New Zealand granted an independent government to the Samoa islands under trust.
In the early 1960s, economic development was clearly positive, but there was no lack of concern when Great Britain made the first contacts with the European Economic Community for its possible entry. This would have called into question the prevalence of the New Zealand market on British soil.

In the period of the second half of the sixties and beginning of the seventies, New Zealand engaged in foreign policy on various fronts: it extended its work from the simple Commonwealth area to the area of ​​South East Asia; then he engaged in Vietnam and moved from British to American influence.

Then, despite the increase in exports and production dynamics, New Zealand experienced the various crises due to unemployment, inflation, increases in wages and costs, as was the case in the whole West. Especially after Britain’s entry into the European Economic Community, New Zealand also made direct agreements to safeguard its products.

In foreign policy, in 1972 New Zealand recognized Communist China and agreed a closer alliance with Australia.
In 1975, the economic difficulties of the moment were the cause of Labor’s defeat in the elections which, instead, reassigned the position of government to the conservatives of the National Party, headed by Muldoon.

Meanwhile, the internal political situation was represented by a continuous alternation of the two main sides, the conservatives and the Labor.

In 1984 and 1989 there were two Labor legislatures, the first chaired by D. Lange and the second by G. Palmer. In 1990, however, the conservatives took over the government with the National Party, whose leader J. Bolger became prime minister. Immediately this government applied a liberal economy and promoted the privatization of important public enterprises. Then, in November 1993, political elections took place and the National Party, although with fewer consents, formed the new executive.

This brought government plans forward in a situation of precarious stability, given the just sufficient majority, until June 1995, when a new centrist party, the Unity of New Zealand, formed of both conservative and Labor elements, which joined Bolger, giving his government greater security and space. In February 1996 the first coalition government was born in New Zealand.

Meanwhile, a certain state of tension had intervened in relations with France since France had decided to resume nuclear tests in the South Pacific. All this fueled internal tension and not a few deputies negatively influenced the supporters of their parliamentary groups. 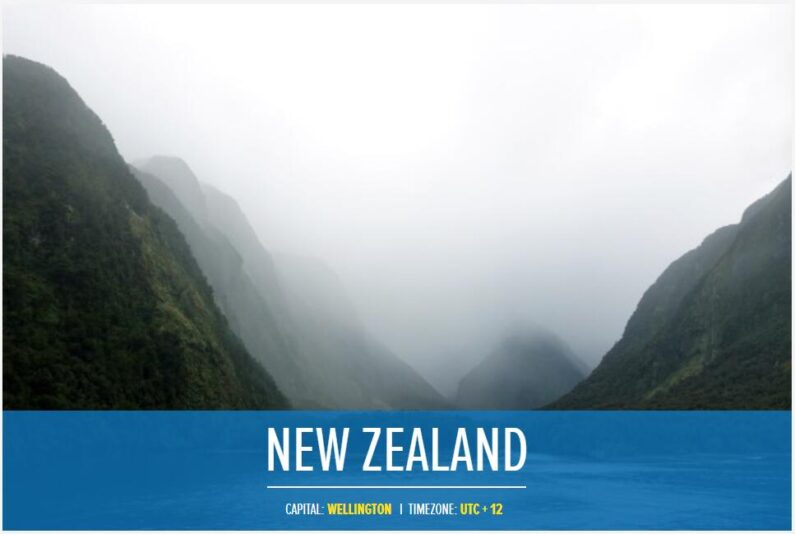 The political elections of October 1996 thus came with this uncertain climate but Bolger, although with only 34.1% of the votes, was once again able to prepare for the formation of a new coalition government. Then, however, his popularity rapidly waned and in November 1997 he left the office of the party to Mrs. J. Shipley, who also assumed that of prime minister in the following December.

The government coalition was made up of the National Party and New Zealand First; it was this latter party which left the government in August 1998, following considerable conflicts. Fortunately, Ms. Shipley was able to count on the accession of eight MPs from the New National First, so that she could immediately set up a new cabinet.

But in November 1999, with the new political elections, the majority returned to Labor whose leader, H. Clark, formed a new coalition government assuming the position of Prime Minister.