The various occupations and waves of migration that Egypt experienced in its history led to the settlement of members of many different ethnic groups in Egypt. They merged with the locals and are all Egyptians today. However, the various influences are reflected in the variety of facial features and in some family names. As a result of the amalgamation, the Egyptians are ethnically and culturally relatively homogeneous, all speak Arabic and share the main features of common social and cultural traditions, even if there are a large number of local and class-specific characteristics.

According to internetsailors, Egypt is the most populous country in North Africa and the largest Arab country. Around 90 million people live in Egypt on 1 million km², which is three times the area of the Federal Republic of Germany. However, 99% of Egyptians live in the Nile Valley and Delta. One fifth of the population lives in the greater Cairo area. These areas are among the most densely populated in the world. In the Nile valley and delta there are 1,120 and in Cairo up to 120,000 residents per km².

In the northern part of the eastern desert and on the Sinai Peninsula there are several Bedouin tribes who descended from immigrants from the Arab countries. The Bedouins, who live on the north coast west of Alexandria, in the more southerly oases of the Libyan desert, in the Sinai and on the Red Sea, also have their own traditions, which are primarily aimed at maintaining tribal ties. Many Bedouins took part in the revolution. The Sinai Bedouins, who suffered many human rights violations after the attacks on tourist centers in recent years, drafted a joint statement in support of the revolution and called for a re-investigation of the attacks after documents emerged that suggested the regime was involved in the attacks.

The Berbers, who have their own dialect (Berber dialect Siwi), live in the oases of the western desert. Due to the great distance to the next larger city Marsa Matruh on the Mediterranean Sea, they were cut off for a long time, but this has gradually changed over the last twenty years due to the development of tourism.

Influences of tribal traditions are also more pronounced in Upper Egypt in the south than in the Nile Delta. The population there is often more conservative, for example with regard to the independence of women and even today blood revenge acts sometimes occur.

However, the number of refugees from Arab countries such as Syria, Iraq or Libya has risen sharply in recent years due to political instability in the respective countries. That has led to changes in society. The entire population picture has therefore changed since the Arab Spring.

Everyone comes together in the greater Cairo area, where around a fifth of all Egyptians live. The people of Cairo are mixed in terms of their origins and their lifestyles. Many feel that the city of Cairo has its own character, offers every newcomer a niche and has a lasting impact on them with its typical tolerant, communicative, self-deprecating character. Cairene especially, but also the Egyptians in general, are bon vivants, always ready for a joke and known for finding a way out of every desperate situation. For this, humor, inventiveness, but also relationships or even distortions of the law are mobilized as required and everyone who lives here knows a variety of situations in everyday life,

Egypt is characterized by rapid urbanization. About 43% of the population lives in the metropolitan area of Cairo and Alexandria. According to UN estimates, a strong increase in urbanization is expected in the next 15 years (around 62% degree of urbanization by 2050). The influx of displaced land migrants is the main cause of this problem.

The Egyptian farmers are looking for economic and social improvement in the big cities. Inadequate education systems, a chaotic infrastructure and a lack of jobs in rural areas lead to increasing rural exodus.

The government in Egypt is facing a major challenge. The spatial distribution of the population between rural and urban areas has shifted significantly. A new sustainable urban-rural structure needs to be developed and implemented, because losing fertile land also means losing living space.

Labor migration of Egyptians abroad is an important economic and social factor in Egypt. Almost 4 million Egyptians live abroad, mainly in the Gulf States and Libya, but also in Europe, North America and other regions. Their money transfers to Egypt are estimated at US $ 8-12 billion and their share of the gross national product at around 4%. The uprisings in the Arab countries forced many migrant workers to return to Egypt.

Almost 110,000 officially registered refugees live in Egypt. The actual number of refugees in Egypt is many times higher, but the estimates differ widely. Above all, people from Sudan and other African countries, as well as Iraqis and Palestinians, seek refuge in Egypt from war and civil war, political persecution and hunger. Recently, more and more families from Syria have been added. The Egyptian authorities leave the illegal refugees largely unmolested, but their social conditions are often very difficult as they cannot officially work, are sometimes separated from their families and often have to deal with traumatic experiences.

African refugees who want to enter Israel illegally via the Sinai are repeatedly stopped by force; many have been shot near the border by Egyptian security forces or tortured by Bedouins in recent years. The Bedouins traded organs or demanded ransom from African families. A number of Egyptian and international religious and human rights organizations offer legal, social, medical and psychological support (e.g. the Nadim Center, which looks after domestic and foreign victims of torture and violence). 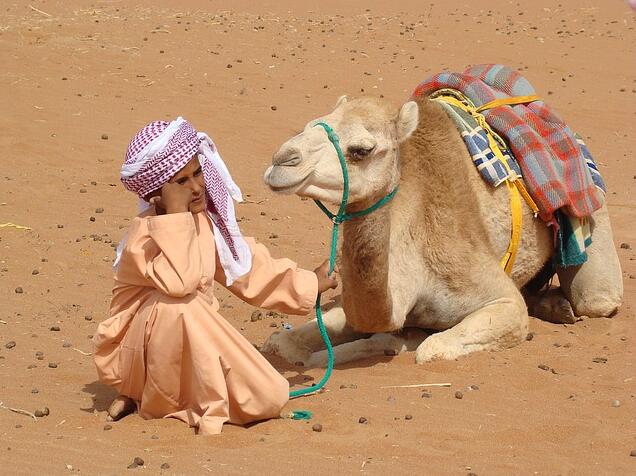