Ethiopia lies on the Horn of Africa and belongs to the African Shield. By Eritrea’s detachment, Ethiopia lost the entire coastal landscape along the Red Sea. The landscape is mainly made up of a highland made up of enormous lava masses from the Tertiary era. The highlands have in many places the character of plateaus and high plains. Many mountain peaks rise over the plains, which are remnants of former volcanoes.

The Ethiopian highlands are naturally divided into two large plateaus of the Rift Valley, a narrow submerged area of ​​land masses that extends as a huge valley from the Red Sea and Eritrea, through Ethiopia and further south through East Africa. The Rift Valley is bounded by steep edges 40-65 kilometers apart. To the north, the highlands of the highlands are falling apart. The valley floor is mostly over 900 meters above sea level and is made up of volcanic material. Several volcanoes are still active, including Afdera (2225 meters above sea level). 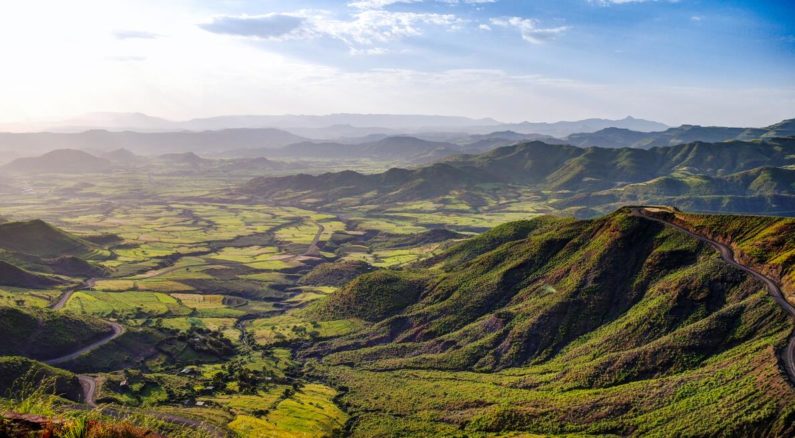 The western highlands, the Abyssinian Plateau, extend north-south for a length of about 500 kilometers. In the heart of the highlands lies the Shewa (Shoa) plateau, about 2,500 meters above sea level, with the capital Addis Ababa. The highlands are sharply bounded to the east by the Daniak Desert by an almost vertical downpour to the bottom of the Rift Valley. The plateau rather weakly to the west, where it crosses into the Sudan High Plains. The mountains reach more than 4000 meters above sea level, such as the Choke Mountains. The highest reaches Ras Dejen (Ras Dashen, 4620 meters above sea level) in the Simien massif. Here, among other things, lies the Simien Mountains National Park (1300 square miles), built from 1978 onUNESCO List of World Cultural and Natural Heritage. The Blue Nile (Abay) flows from Lake Tana, Ethiopia’s largest lake. From here, along with its tributaries, it has cut deep into the lava masses. In Gojjam, the Blue Nile River valley is 1,400 feet deep, as deep as the Grand Canyon in the United States, but twice as long as this one.

The eastern highland area, the Somali plateau, is similar to the western one, but is not that big. The Somali plateau also has its highest point towards the Rift Valley, where there are several mountain peaks over 4000 meters above sea level. It includes the Bale Mountains ( Batu, 4307 meters above sea level) with the Bale Mountains National Park (2400 square miles). The Somali plateau rather towards the southeast, where it crosses into the lowlands of Somalia. The largest rivers that flow eastward are Shabelle and Ganale Doria (Juba).
The volcanic business has formed a number of inland pools with small lakes, most saline and without drains. The largest of these is called Abaya. To the northeast, the Awash River flows into the Danaki desert, where it evaporates into a large salt lake before reaching the sea.