The Gambia is a republic in West Africa and consists of an elongated strip of land on both sides of the river of the same name. The country borders the Atlantic Ocean in the west and is surrounded by Senegal in the north, east and south. The Gambia is the smallest country in mainland Africa, and has few natural resources of importance. The capital is Banjul, formerly called Bathurst.

The name Gambia is from Portuguese: “Gambra” or “Gambru” which is corrupted by “Ba-Dimma”, the locals name on the river Gambia. 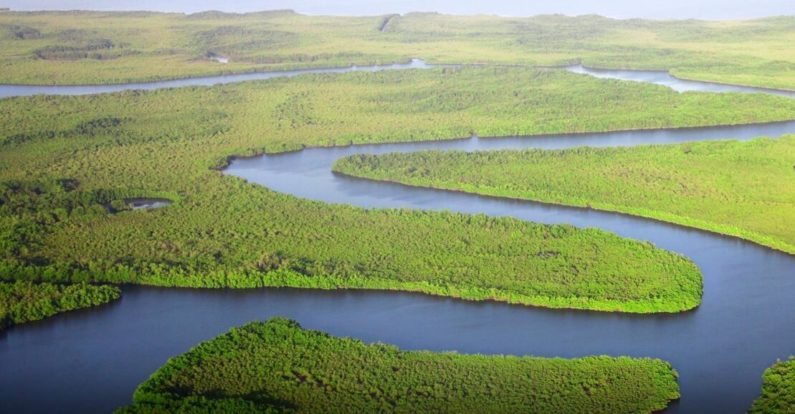 The Gambia includes the lowlands on both sides of the lower Gambia River (about 475 kilometers) and is 24-50 kilometers wide. The entire country consists of a low and flat valley bottom that is subject to flooding. The highest point is Red Rock, 53 meters above sea level.

The climate is tropical and dry, and characterized by the northeast pass in winter and southern winds in summer. The average temperature in Banjul is 23 ° C in January, the coldest month, and 26-27 ° C during the hottest summer months. The annual rainfall is about 1300 millimeters on the coast and decreases to about 750 millimeters furthest east. There is rainy season from June to October and drying time from November to May. Drought is a frequent problem.

The banks of the Gambia River are covered by mangrove forests and wetlands. Inside, there are large areas of savannah, “bano foros”, which are flooded several times a year. The driest parts of the country have sand plateaus. The bedrock is mainly sandstone formed in tertiary.

The largest mammals include hippos, antelopes, warthogs and brush pigs. There are many small predators, house monkeys and cat cats. Many bat species eat, among other things, large amounts of malaria mosquitoes. In the Gambia River and the mangroves, there are hippos and crocodiles. There are more than 560 bird species, including Estrildid Finch, weaver birds, pink-backed pelican, horn birds, bee-eater and several species of herons. There are many snakes and lizards. In mangrove forests, there are, among other things, the species of mud creeps and waving crabs.

English is the official language. By the way, 13 languages ​​are spoken, including mandinka ( mandingo ), wolof and fulful.

95.7 percent of Gambia’s population are Muslims and 4.2 percent are Christians. Others are followers of the Baha’i and local religions (2013).

The Gambia is administratively divided into eight areas and one city ( Banjul ), and further into 43 districts.

The armed forces consist of the Gambian National Army and the Republican Guards which comprise the Presidential and Special Forces, as well as a small naval unit. It is not conscientious.

The Gambia is a member of the UN and most of the UN’s special organizations as well as of the Organization of African Unity (OAU), ECOWAS (Economic Community of the West African States) and the Cotonou Agreement.

Archaeological finds show that Mandingos and Berbers came to both sides of the Gambia River in the 400s. The area became part of the vast Mali kingdom in the 13th century. When this disintegrated, local chieftains took over parts of the area and created the kingdoms of Barra, Fulladu and Kombo, among others.

Portuguese came to the mouth of the Gambia River in 1455 and English and French traders came to the area in the 1600s. They conducted extensive trade (including gold and ivory ) and slave trade in the area. British and French exchanged control over the area, but in 1783 permanent British rule was established around the river while the French retained an enclave in the north until 1857.

Political parties emerged in the 1950s, and inner self-government was achieved in 1962. Full independence within the Commonwealth did not come until 1965, first as a monarchy, and from 1970 as a republic. The dominant politician was Dawda Kairaba Jawara who was prime minister from 1962 and president from 1970.

A leftist coup was abolished in Senegalese aid in 1981 and the state of emergency prevailed until 1985. As a result of the coup, Senegambia Confederation was established with Senegal in 1982, but Gambia withdrew as early as 1989.

In 1994, Jawara was deposed by the military in a coup launched by young officers. Lieutenant Yahya Jammeh established a military council with himself as Gambia’s new head of state. The transition to civilian rule was made with the election of president in 1996 and national assembly in 1997. Jammeh became president and ruled the country with the iron hand for the next 20 years, with repeated assaults on opposition and human rights activists. Jammeh was re-elected president in 2006 and 2011. Gambia resigned from the Commonwealth in 2013. In December 2014, a small group from the diaspora made another failed coup attempt. Without first amending the Constitution, Jammeh declared in 2015 that Gambia was an Islamic republic.

In the December 2016 presidential election, Jammeh lost surprisingly to opposition candidate Adama Barrow. Jammeh initially refused to give in, but was forced out of the country in January 2017 after ECOWAS forces, led by the Senegalese military, moved into the Gambia. At the April general election, Barrow’s coalition won a majority. Barrow has since worked to improve Gambia’s international reputation, including starting the process of rejoining the Commonwealth.

The Gambia is a small country with few resources and heavily dependent on peanut exports, diaspora aid and limited tourism revenues. In 2017, agriculture accounted for 20.4 per cent, industry 14.2 per cent and service industries about 65.4 per cent of GDP.

Agriculture is characterized by small farms with production mainly for their own consumption. Around 30 per cent of the labor force is employed in agriculture (2014). The most important product is peanuts (peanuts) with almost 90 per cent of export revenue. Half of the crop is pressed into oil, which makes up a large part of the country’s industry. Other agricultural products are millet, sorghum, rice, manioc, corn and vegetables. Cattle, sheep and goat are the most important of livestock. Fish and fish products are also exported. Industry and services employ 13.9 and 54.6 per cent of the workforce, respectively. Unemployment is high, estimated to be around 30 percent (2014).

Package tourism especially from Northern Europe creates significant employment, but is almost entirely governed by foreign interests so that direct income is low. In addition, tourism is vulnerable, especially to the turbulent political context.

The Gambia has a large deficit in the trade balance with abroad and is largely dependent on assistance.

The Gambia has free, but not compulsory, nine-year primary school from the children is seven years. About 70 percent of children start school. Most high schools are private. There is one university and several colleges.

There are two daily newspapers and several weekly newspapers. The country has long suffered from a strong lack of freedom of the press, but since Adama Barrow came to power things have improved somewhat, and there are now more newspapers and more freedom of expression. The Gambia Radio and Television (GRTS) broadcaster is state.

Gambian music is closely related to Senegalese music. Professional wandering griots perform songs and chant on, among other things, the chorus ( harp ), balafon ( marimba ) and the stringed instrument contingent. The dance music mbalax unites western music and drum and dance music sabers. It is a rich tradition with different drums. Salsa and hip hop are popular dance genres. Foday Musa Suso (1950–) is an internationally recognized musician and composer.