Gabon is a republic in western Central Africa, on the Gulf of Guinea on both sides of the equator. Border in the north to Equatorial Guinea and Cameroon, in the east and south to the Republic of Congo and in the west to the Atlantic Ocean. The country, which is one of the most prosperous in Africa, became independent in 1960. The capital is Libreville.

The name Gabon is from the 15th century when Portuguese discovered the area and called it “Rio de Gabão”. The name comes from Portuguese : “gabão”, “cape with hood”, which the outlet of the Komo River’s distinctive shape can recall.

The topography can be divided into three: the coast, the river valleys and the inland plateau. While the coastal strip is relatively narrow in the north and south, it is considerably wider in the middle parts, where the river Ogooué has an outlet. The north coast is lined with coves and inlets while the south coast is characterized by sandy beaches and lagoons.

The coastal plain in the south is 20-40 kilometers wide and in the north 120-140 kilometers wide, while at Ogooué’s outlet at Cap Lopez it is up to 200 kilometers wide. The eastern parts are dominated by a wide inland plateau with the country’s highest peak, Mont Iboundji, 972 meters above sea level. The plateau is made up of Precambrian rocks where Ogooué and bees have carved valleys and pools.

The climate is tropical and markedly equatorial. Temperatures are high throughout the year and vary little. Libreville has an average temperature of 24 o C in July (coldest month) and 27 o C in March-April (warmest months). The annual rainfall is 1500-4000 millimeters. There is most rainfall on the northwest coast; rainfall decreases to the east and south along the coast. It is rainy season from mid-January to May and from October to mid-December.

About three-quarters of the country has tropical rainforests with more than 3000 plant species, including tree species okoumé, mahogany and ebony. There are mangroves in the Ogooué Delta and the Gabon River, while the drier southern and southeastern areas of the country are characterized by savanna and forest savanna.

There is a rich wildlife in the dense forests, with monkeys such as gorilla, chimpanzee, mandrill, maracats, manga islands and half- monkeys. Among other things, brushwood and sneakers live in the forest floor, and there are also antelopes and elephants. The bird fauna is rich with, among other things, parrots, sunbirds, hornbills and turakos. In rivers there are crocodiles, hippopotamus and sea ​​chart senegalmanat. There are many frogs and snakes, including python snakes and gabon wasps. Insect life is rich with a myriad of butterflies and large beetles. 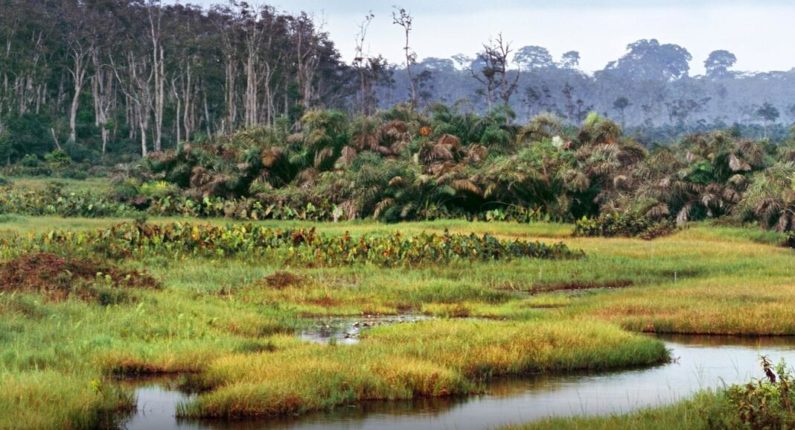 The population consists of more than 40 groups of people. The largest are fangs north of the Ogooué River in the north and northwest while other Bantu- speaking people live central and southern parts, including bapoyunou, nzebi and obamba. In the forests, a few thousand babinga ( pygmies ) live as hunters and sankers. There are around 10,700 French people living in the country (2015).

French is the official language and in addition 37 other languages ​​are spoken, including catches by about 30 percent of the population. All the languages ​​except French and the adamawa-ubangi language binga, spoken by pygmies, are bantu languages.

Gabon is a presidential republic and has been a multi-party state since 1991. The president is head of state, head of government and military commander-in-chief, elected in general elections for 7 years and eligible for re-election. The government is appointed by and responsible to the president. Parliament has 2 chambers: the National Assembly, with 120 members elected in direct elections for 5 years, and the Senate, with 102 members elected in single constituencies for 6 years.

Military service is voluntary. The professional defense forces of about 5,000 men consist of army, navy and air force as well as a semi-military gendarmerie. A 1,800-man presidential guard is protecting the president.

Gabon is a member of the UN and several of the UN’s special organizations, the World Trade Organization, the African Union (AU) and the Cotonou Agreement.

The indigenous people are believed to have been babinga, or pygmies, since about 5000 BCE. These were largely supplanted by immigrant Bantu tribes, most recently prisoners in the 18th century.

Portuguese traders came to Gabon in 1472 onwards. They settled on islands off the coast and traded mainly with ivory and timber with natives on the mainland. Until well into the 19th century, several nations operated slave trade on the Gabon coast.

In the 18th century, the Dutch settled on the island of Corisco and French Christian missions were established in the years 1842-1844. They built a fort and created a sanctuary for escaped and freed slaves ; in 1849, this town was named Libreville, “The City of Liberty.” A French governor of Gabon was appointed in 1886 and the area became associated with French Congo in 1897. In 1910 it became a colony in French Equatorial Africa. Gabon became a French overseas territory in 1946, gained internal autonomy within French society in 1958 and became an independent state in 1960.

Until his death in 1967, President Léon M’Ba was the country’s leading politician. After him, Albert-Bernard Bongo (since 1973 Omar Bongo ) took over the country’s thriving economy and worked closely with France. Bongo introduced a one-party system in 1968 and struck hard on all opposition. Strong opposition from the people led to the introduction of democracy and multi-party system in 1991. Bongo was president for 42 years until his death in 2009, when his son Ali Bongo Ondimba took over. A coup in 2011 failed. Gabon has experienced rapid economic development by being one of Africa’s leading oil exporters.

Rich resources of minerals, especially petroleum and manganese, and timber, combined with a low population, have made Gabon one of Africa’s most prosperous countries. However, the wealth is very unevenly distributed.

Agriculture consists mainly of small self-storage farms. Taro, manioc, corn, rice, sugar cane, cocoa and coffee are grown, and palm oil and rubber are extracted for sale. The country is not self-sufficient with food products which must be largely imported. Offshore, fishing is conducted within a 200-mile zone. Animal husbandry is difficult due to the tsetse fly, but resistant cattle, pigs, sheep, goats and poultry have been introduced.

Gabon is the world’s largest producer of wood-type okoumé, used especially for plywood. It also exports ebony and mahogany. The timber production is mainly operated by European companies and the timber transport takes place on river systems.

France, the United States and China are the most important export markets.

Officially, there is schooling for 13 years, of which primary school for 6 years, secondary school for 4 years and high school for 3 years. The school system is strongly influenced by the French. There are 3 universities and several institutes.

In the music scene there are 2 old main traditions, the pygmies and the bantu people. The Pygmies are known for vocal music (polyphony, yodeling), while the Bantu people’s music and dance are especially associated with initiation ceremonies. Typical instruments are harp, slot drum, bells, rattles and horns, sansa (thumb piano) and xylophone. Migrant musicians play mvett, a harp sitter.

In the art, Gabon is especially known for sculptures and masks for use in traditional ceremonies.