Due to the strategic importance of the Horn of Africa and the many regional conflicts, Ethiopia has been drawn into the great power struggle for spheres of interest. The country cooperated with Britain during World War II, with the United States after the war and with the Soviet Union after 1977, when the alliance relationship changed completely: from being a close ally of the United States, Ethiopia became the Soviet Union’s closest ally in Africa.

As closely associated with the Eastern Bloc, Ethiopia also received assistance from the GDR and Cuba, among others ; the latter deployed large troop forces during the Ogaden War, which turned the war in favor of Ethiopia. Soviet support included an extensive arms bridge to Ethiopia during the Ogaden war and then military assistance in the war against the liberation movement in Eritrea.

Regional conflicts have caused tense relations with several neighboring countries; In particular, relations with Somalia have traditionally been strained, partly as a result of Somalia’s demands on land in Ogaden. This conflict led to the Ogaden war between Ethiopia and Somalia in 1977–78. After Ethiopia defeated the Somali attack, the two neighboring states have fought the conflict through support for various rebel groups. As a result of the escalation on the Eritrea and Tigray frontschose Ethiopia to restore broken diplomatic relations with Somalia in 1988; troops stationed at the Somali border could thus be released into service in Eritrea. As part of the conflict between Eritrea and Ethiopia, these two states have also played on Somali groups. Ethiopia is said to have supported groups that fought Somali President Hassan Aidid. Following a 1999 agreement, the two countries should refrain from supporting rebels in the other country. In 1995-96, the Islamist group al-Ittihad al-Islamiya detonated several bombs in Ethiopian cities, prompting the Ethiopian Air Force to attack and exterminate al-Ittihad al-Islamiyasbases in Luuq, Somalia, August 1996. After this, Ethiopia conducted occasional military operations on Somali soil. After the United Islamic Courts (UIC) took control of Mogadishu in 2006 and declared jihad against Ethiopia, the Ethiopian army launched a large-scale invasion in December of that year. The UIC was soon chased out of Mogadishu, but this provided the basis for ongoing fighting between Ethiopians and the Islamist group Al-Shabaab . Ethiopia withdrew in 2009, after a new Somali government was put in place and security taken over by the African Union (AU) forces. Ethiopia, however, went along with Kenya, entered Somalia again in 2011 to continue the fight against Al-Shabaab. Ethiopian forces are now integrated as part of the AU’s forces. 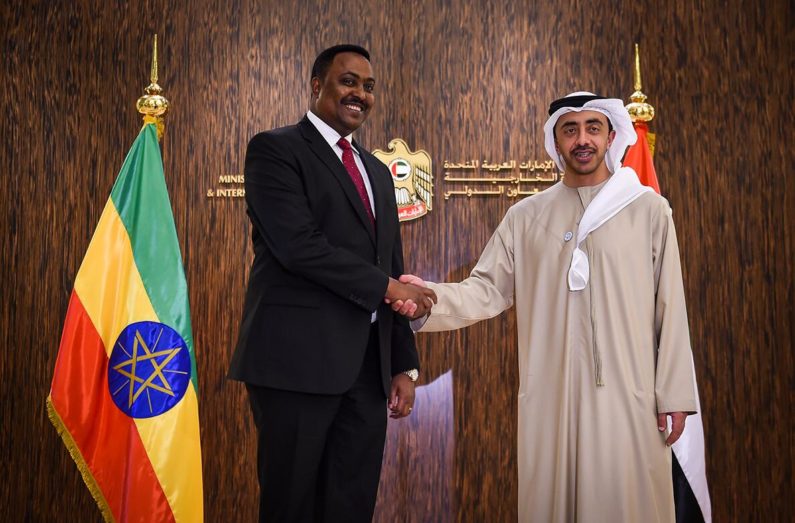 Relations with Sudan have also been bad, and Ethiopia supported the South Sudanese liberation movement SPLM, while Sudan saw through its fingers that EPLF sent its supplies into Eritrea via Sudan. Ethiopia, together with Eritrea and Uganda – and with support from the United States – continued to assist SPLM / SPLA, including weapons, training and direct military participation. Relations with Sudan were weakened following the attempted assassination of Egyptian President Hosni Mubarak in Addis Ababa in 1995, which Sudan was believed to be behind. The situation was later improved, and Sudanese President Ethiopia made an official visit in November 1999. Several cooperation agreements were signed. Road connections have been improved, enabling, among other things, Ethiopia’s use of the Port Sudan on the Red Sea coast. In 2004, Ethiopia, Sudan and Yemen joined forces to form an anti-terrorist axis against extremists active in the Horn of Africa.

Ethiopia has in recent years played a more active role in regional cooperation on the African Horn. In 1986, the country was one of the founders of what eventually became the Intergovernmental Authority on Development (IGAD), which was restructured in 1996. IGAD, with Ethiopia in a leadership role, has been heavily involved in the conflict in Somalia, and since 2011 in the conflict in South Sudan. Ethiopia has been particularly involved in the latter conflict, where former Foreign Minister Seyoum Mesfin has been responsible for negotiations between the parties involved. This commitment is linked to Ethiopia’s rapid economic growth in recent years, with the country seeing itself as an important premise for development and stability in the African Horn.

Israel has traditionally had a close relationship with Ethiopia. In the 1980s and until 1991, Israel delivered weapons to the junta, against which Israel was allowed to bring Ethiopian Jews, Falasha, to Israel, first through a secret operation via Sudan, and later openly from Ethiopia. In 2003, Israel announced that it would welcome another 20,000 Ethiopians of Jewish origin. Ethiopia has traditionally also had a good relationship with Egypt, but in the second half of the 1990s, Ethiopia objected to Egyptian plans for more intensive use of Nile water. Egypt, for its part, has been skeptical of Ethiopian plans to build a dam on the Blue Nile, from Lake Tana. In 1999, Egypt, Ethiopia and Sudan signed an agreement on strategic cooperation on the Nile. This has become more strained after Ethiopia began construction of the so-called Grand Ethiopian Renaissance Dam in 2011, which Egypt fears will reduce its access to water. Relations with neighboring Djibouti were strengthened as a result of the war with Eritrea, when Ethiopia lost access to the Eritrean ports on the Red Sea coast and became dependent on Djibouti port for most of its foreign trade. Ethiopia has also maintained good relations with Kenya, and has looked at the possibility of also using the port of Mombasa. Large-scale plans to develop a new port in Lamo in Kenya are underway, and the idea is to build links to South Sudan and Ethiopia. Ethiopia has also established good relations with Saudi Arabia, and in 1999 signed a security agreement with Yemen – which has been in military conflict with Eritrea.

Following the change of power in 1991, Ethiopia has pursued an open foreign policy, and relations with the United States have improved significantly. As the seat of the headquarters of the Organization of African Unity (from 2002 African Union), Addis Ababa and Ethiopia is a foreign policy center in Africa, with a large number of embassies. In 1994, Ethiopia participated with soldiers for the UN force to Rwanda, 2003 for the African force in Burundi and 2004 for the UN force in Liberia.