Gender roles, family and everyday life: Traditional gender concepts and roles are shaped by tradition, religion and culture as well as by the specific social and economic living conditions. In Egypt, religion is not an essential criterion for different gender concepts. Place of residence, education and social class, on the other hand, play a stronger role. The traditional role model assigns men the task of materially supplying the family and representing it to the outside world, while women are responsible for reproductive and nursing tasks. In addition, family honor has traditionally been tied to the control of women’s sexuality. Sexuality is viewed positively, but only in the context of a legitimate marriage relationship. A large number of rules of conduct and restrictions on freedom of movement and freedom of choice for women have traditionally been derived from this, and in some cases still are. However, the traditional role models have been severely shaken by rapid social and economic change in recent decades. Many families can no longer do without work and income for the women and most Egyptians see many examples in their environment in which the man suddenly finds himself without a regular job and the woman has to step in. Today women must be able to act more or less like a man in the world of work and in public spaces and to assert the increased access to education.

According to militarynous, today there are a multitude of different ways in which Egyptians shape their lives, their families, their work and their social relationships. The gender relations are constantly renegotiated and are also a big topic in public. In most societies, social practice changes faster than normative ideas. Often, Egyptians do not fundamentally question traditional gender roles, but they reinterpret them. A variety of religious, governmental and developmental discourses are available to them that offer arguments to justify very different practices.

However, the revolution has also brought the polarization of Egyptian society in relation to women’s rights and ways of life to the surface and has become the subject of heated disputes. Above all, many women and secular forces fear the extreme positions of the Salafists and other radical Islamists, many of whom would prefer to forcibly veil them and ban them from public life or at least organize the public space according to gender. There is a risk that important achievements of recent years will be reversed by the first post-revolution parliament, which was dominated by the Muslim Brotherhood and Salafists, and that the dispute about the position of women at the center of the discourses about Egypt’s cultural identity and an Islamic or secular orientation of the State is advancing. To what extent significant parts of the Egyptian population actually join the radical Islamists in their misogynistic interpretations of the Islamic religion remains to be seen. In the best case, that is, if a minimum of sustainable democratic framework conditions can be implemented, the various political and social forces can continue to act and compete relatively openly. In this case, the instrumentalization of religion for political interests will no longer be as easy as it was under the conditions of the dictatorship. This would be an opportunity for Egyptian society to solve problems that have been hidden and negated for many years. This also includes a redefinition of gender relations on the basis of fundamental human rights. 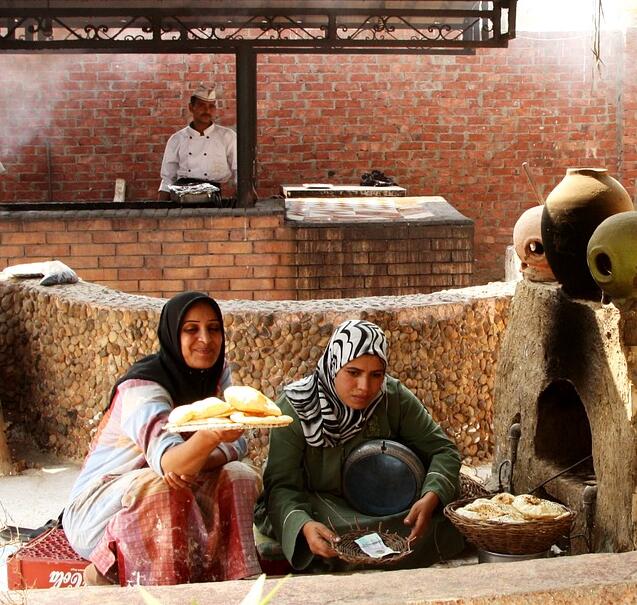 The high population growth (2.18% – 2020) and the gap between rich and poor are exacerbating the social situation in Egypt. The population has almost doubled in the past 30 years. Around a quarter of the people live below the national poverty line and around 2 million children between the ages of 5 and 15 have to work to support their families financially.

The struggle for usable soil and clean water and industrialization in urban areas with high population densities lead to air and water pollution.

In Egypt the social class is innate. It is more defined by family background than money or wealth. Social classes are very evident in Egypt as they determine access to power and influence. There are three social classes: upper (approx. 10%), middle (approx. 40%) and lower (approx. 50%).

The upper class controls political life and the economy. The elite live in the suburbs of Cairo such as Garden City, Al Zamalek and Nasr City. But not far from these affluent neighborhoods, the lower class lives in slums, overcrowded apartments and misery. The middle class corresponds to about 40% of the population and has to work very hard not to slip into the lower class.

The social classes can also be identified by geographical regions. Historically, the north of Egypt (formerly the seat of the king – Alexandria) was the seat of the elite and therefore received more attention from the governments than the predominantly rural south (from Beni Suef about 120 kilometers south of Cairo to the border with the south).

Since the reign of King Farouk (1936-1952), there have been clear divisions between the social classes in Egypt. In 1952 there was the first military coup in Egypt. The so-called ” Free Officers ” (including Gamal Abdel Nasser, Sadat and Mubarak) have deposed the king and taken over power. Many of the Free Officers did not come from the top social classes and therefore intended to change the social structure in Egypt in order to widen the economic possibilities for the general population and to close the gap between the upper class and the other classes.

However, if you look at Egypt today, you will find that the policies of the Free Officers merely changed membership of the elite (now the military also belongs to the upper class) rather than causing their downfall.

The sad fact that a garbage man’s son can never be a doctor or a judge is a social reality in Egypt. An improvement in the social class is impossible in Egypt.