… under the Mubarak regime

The allegations documented in the reports of human rights organizations during the Mubarak regime concern arbitrary arrests and torture, not only against political activists, Islamists and criminals, but increasingly also against striking workers. Those arrested were often held for years without charge or judgment. Court orders for release were regularly ignored. The freedom of the press was severely restricted, freedom of assembly practically nonexistent and freedom of association was tightly controlled. It is also suspected that, as part of Egypt’s cooperation with the US, there were secret extraditions of terrorist suspects and that an unknown number of people were held and tortured in secret Egyptian prisons. Democracy and human rights activists have long called for the lifting of the state of emergency, which has existed without interruption since 1981 and which undermines the fundamental rights guaranteed in the constitution and represents the legal basis for human rights violations.

According to ethnicityology, the main pillars of the old regime were the Ministry of the Interior, the ruling National Democratic Party (NDP), the state media and the municipal councils at the district and district level, 99% of which were controlled by the NDP. With around 1.2 million members, Egypt’s internal security apparatus comprises more than twice as many people as the army. According to a study in March 2012, the security apparatus cost the country US $ 14 billion a year. The most important organs for safeguarding the old regime were the “Central Security Forces” (ZSK, ar: amn al-merkazi), a paramilitary, barracked special task force with around 325,000 members who were and are used in demonstrations, among other things, and the State Security Service (SSD, ar: mabahith amn al-dawla), which monitored all opposition. Both organizations maintained secret prisons and torture chambers.

The domestic policy under Mubarak was generally characterized by the protection of the regime. The Ministry of the Interior was given ever greater resources and ever greater leeway in the state apparatus. An important decision maker in state-controlled organizations could not take office without the approval of the State Security. After the revolution, it was announced that plans to install Mubarak’s son Gamal as his successor went back to 1998. Since then, the control of all public life by the organs of the Ministry of the Interior has intensified, as has the brutality of the security forces against all kinds of protests. This also included the increasing use of civilian thugs, the so-called “baltagiya”. 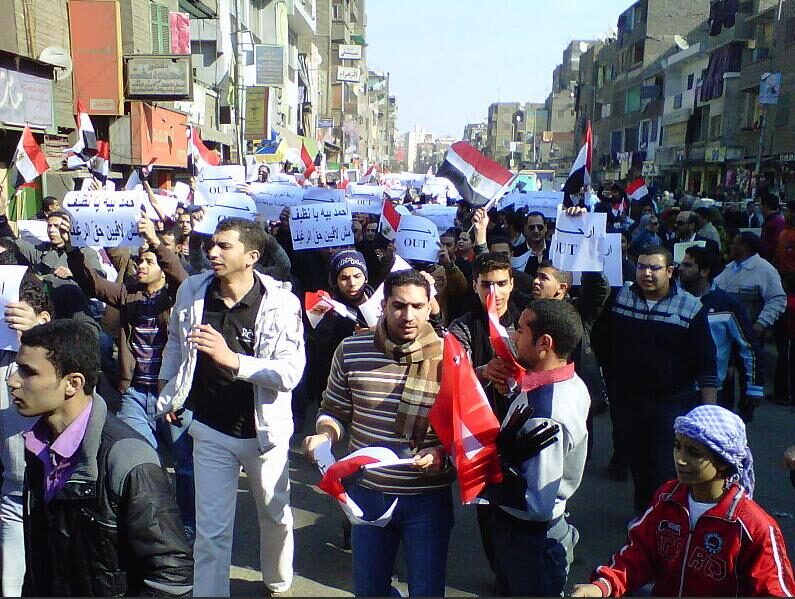 … and since the revolution

The protesters are calling for reforms. After evidence of organized destruction of evidence had accumulated, the headquarters of the SSD in several governorates were stormed by demonstrators in March 2011. The SSD was also accused of provoking violent clashes between Muslims and Christians. On March 16, the SSD was finally dissolved and a new organization was founded instead, the National Security Agency (NSB, ar: heeh’at al-amn al-qawmi). However, there are doubts whether this is more than a mere name change. The ruling party NDP was dissolved on April 16, 2011 by court order on the grounds of involvement in corruption and human rights violations. To date, however, this reasoning has not resulted in any indictment against the party’s leadership. The dissolution or democratic restructuring of these organizations are central demands of the revolution.

The demonstrators are demanding further changes, including the exclusion of former NDP members from any political activity for five years in order to prevent the party from reorganizing itself under a new name. The group “emsek flol” (something like: grab the remnants of the old regime) publishes information on former NDP members, including a list of new parties, which mainly consist of NDP members. The demonstrators are also calling for a civilian to be appointed as interior minister and for the interior ministry to be completely restructured from a democratic and human rights perspective. Democratic forces within the Ministry of the Interior supported these demands and also plead for the dissolution of the ZSK. Also followers of the regime in the media,

To this day, the Ministry of the Interior and the army are accused of violating human rights. Activists and bloggers documented numerous cases of violent attacks on protesters, torture and arrests by security forces in connection with demonstrations. The forced virginity tests on 18 women who were arrested by army forces in Tahrir Square in Cairo on the night of April 8-9, 2011 made special headlines. Many activists are particularly angry that even known torturers and many of the officers suspected of being responsible for the excessive violence during the revolution are still serving in the Ministry of the Interior without charge.

During the revolution, the Egyptians fought for freedom of expression, assembly and organization. However, these achievements are by no means certain. Forces from the army and the Ministry of the Interior repeatedly cracked down on demonstrators, again including hired thugs. From January to September 2011, according to data from Human Rights Watch around 12,000 protesters arrested and tried in military courts, more than in Mubarak’s entire reign. Many were sentenced in an urgent procedure without complying with minimum legal standards. In March 2011, a law was passed that criminalizes both calling and participating in demonstrations. So far, the Egyptian public has reacted sensitively to such attacks and in several cases the military has apologized. In autumn 2011, tensions intensified after a series of massive clashes between demonstrators and security forces. In a series of clashes between October 2011 and February 2012 over 100 people were killed and more than 4000 were injured, some seriously.