The geography of Egypt is characterized by the sharp contrast between deserts and the fertile Nile valley, over 1000 km long and up to 15 km wide, which together with the Nile delta only makes up 4% of the cultural or settlement area and where 99% of the population live. There have been efforts for years to expand the settlement areas into the desert and to make the desert usable, but this is fraught with many problems. One of the largest of these projects is the controversial Toschka project for the utilization of the desert in the south-west of the country, which was initiated in the late 1990’s.

The Libyan desert in the west, which belongs to the Sahara, and the mountainous Arabian desert in the east limit the Nile valley. In the part of the Libyan desert that borders the Mediterranean Sea to the west of El Alamein, there are still thousands of landmines from the Second World War, to which people still fall victim to detonations every year. In the Libyan desert you can find the oases Siwa, Bahariya, Farafra, Kharga and Dakhla. The Arabian Desert extends to the Red Sea and the Suez Canal.

The Sinai Peninsula with Mount Moses and St. Catherine’s Monastery, one of the oldest Christian monasteries, was occupied by Israel in the so-called Six Day War in June 1967 and only gradually returned until 1982 after the peace treaty of 1979. In 1997, the major project of the so-called Salam (Peace) Canal was tackled, with which water was to be conducted from the Nile into the Sinai and thus to make desert land usable for agriculture. However, the project was finally abandoned in 2006 due to high costs and doubts about its usefulness. The question of the economic development of Sinai is back on the agenda after the revolution.

According to a2zgov, the average height of Egypt is about 15 m below sea level – the lowest point is the Qattara Depression at 133 m below sea level; the highest is the Katharinenberg on the Sinai Peninsula with 2637 m.

The Wadi Hitan National Park in the semi-oasis al-Fayum, where whale skeletons up to 40 million years old can be seen, should also be emphasized. The El-Fayum semi-oasis is located 100 km southwest of Cairo. This is home to a wide variety of bird species all year round.

The Ras Mohammed National Park in the south of Sinai is known, among other things, for its coral reefs, which are increasingly endangered by uncontrolled tourism and oil from boats and ships.

The flora of Sinai is characterized by acacias, date palms, junipers and tamarisks. In Sinai there are also many medicinal plants and a long history of traditional herbal medicine based on them, the knowledge of which has been passed on among Bedouins in years of training. There are now also plant medicine schools. There are also mangrove forests in the Nabq Protectorate north of Sharm El Sheikh and on the Red Sea. There is also a huge variety of fish and marine animals. Dolphins, sharks, rays, clownfish are just a few of them. The Qattara Depression is an important biotope for cheetahs and gazelles.

Further information on the national parks and nature reserves can be found on the Protected Areas of Egypt website. 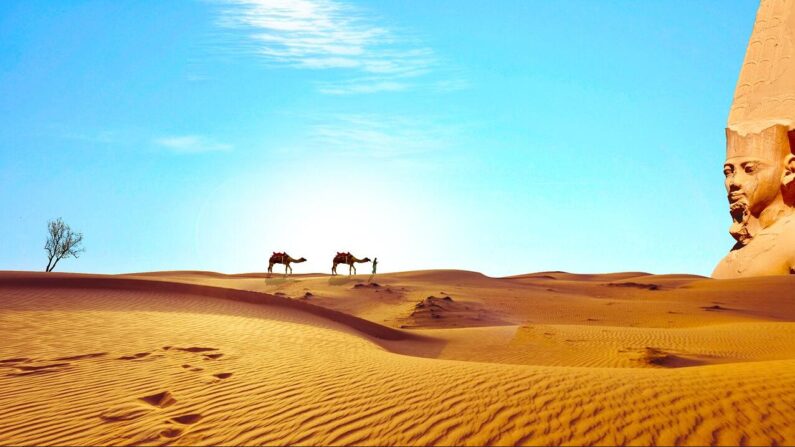 Due to the large desert areas on both sides of the Nile valley and the intensive agricultural use of the Nile areas, the natural vegetation of Egypt is in large parts not very lush. Tamarisks and acacias grow in the desert; Date palms, carob trees and sycamore figs are also on the banks of the Nile. Lotus trees and bamboo are found in the Nile Delta. Hares and jerboa live in the desert; also scorpions, snakes and lizards as well as Bedouin camels. Jackals, hyenas and fenneks (desert foxes) are also part of the Egyptian fauna. Water buffalo and donkey are common livestock in the Nile valley and delta.

The climate of Egypt is largely determined by the large desert areas. With summer temperatures above 40 °C and considerable temperature fluctuations between day and night, frequent strong sandstorms in spring and mild winters (around 20 °C during the day), the semi-desert and semi-desert climate prevails. Only the Mediterranean coast and the Nile Delta with their Mediterranean climate benefit from precipitation – with an annual average of 200 mm, which in Cairo only reaches an annual average of 25 mm. In December 2013, however, snow fell in Cairo for the first time in 112 years.

The Sinai Mountains are the only area in Egypt where winters can get quite cool. Due to the high elevations, temperatures can drop to 0 to 5 °C at night; during the day it is around 12-15 °C. However, spring and autumn are mild and are recommended as the ideal travel time. Even in the deserts it gets really cold at night in winter.

Current weather conditions and forecasts for various cities in Egypt can be found on the Weather Underground website.