Economy and Business in Gambia


The Gambia is a small and resource-poor country, with an open economy where trade plays a significant role.

The Gambia is mainly an agricultural country, and is heavily dependent on the export of one agricultural product – peanuts (peanuts) – as well as revenues from the tourism industry. The country has a small formal economy and much of its agricultural production goes to its own consumption. The country’s economy is therefore very vulnerable to fluctuations in peanut crops and world market prices, while the Gambia is in an area of ​​irregular rainfall and frequent drought periods.

The Gambia has a service sector that is of greater economic value than in most African countries. It is particularly linked to trade and tourism, and accounts for approx. 60% of GNP – ie a share more than twice the size of agriculture (about 25%). Gambia’s modern economic sector is small, and with the exception of tourism, its economic structure is very similar to that of the colonial era, with extensive agricultural production for export – and small industry. The Gambia has not focused on industry, but has a significant trade sector, including a lot of transit trade to neighboring Senegal – some of which in the form of smuggling. The Gambia also has no significant natural resources in the form of minerals, although it has been announced worthy discoveries of, among other things. oil and uranium. Tourism has become an important part of the Gambian economy from the 1970s, but was weakened after the military coup in 1994, before the visit resumed. Most of tourism is in the form of package tourism from Northern Europe, and creates significant employment. But unlike the other business sector, which is largely owned by Gambians, the tourism industry is almost entirely controlled by foreign interests, and direct revenue is limited. Gambia’s attractions are especially climate and beaches, as well as cultural life; the country has less wildlife than many other African tourist destinations; on the other hand a rich bird life. The Gambia has two World Heritage Sites, the Kuntah Kinteh Island with associated areas and the Senegambia Stone Circles, which are shared with Senegal.

Agriculture is the main industry road, and employs about 70% of the working population, but does not account for much more than approx. 1/4 of the country’s GNI. The sector is characterized by small farms, and most of the production is for own consumption. By far the most important crop for turnover is peanuts (peanuts), which are grown on the sandy soils of the higher-lying, flood-free parts of the country. Peanuts traditionally account for approx. 90% of Gambia’s export revenue. Some of the crops are smuggled to Senegal and traded there, depending on the price level. About 80% of the crop is exported. Half of the peanut crop is pressed into oil, and peanut processing is a significant part of the country’s industry. Small quantities of cotton, rice and cattle are also exported. For domestic consumption, especially rice, millet,sorghum, cassava, corn and vegetables. Rice is an important part of the basic food, and imports of this commodity – equivalent to approx. 70% of consumption – is a significant expense item. Focusing on the improved Nerica rice type, which produces greater crops, can make the country more self-sufficient.

It is especially the women who do the practical work on agriculture, which many places run jointly.

The Gambia has a small coastal strip. The country has rich fishing traditions at sea and in rivers, and the coastal fishing fleet is numerous. Traditional craft fishing provides some employment. The catches are partly traded locally; something is being exported.

The Gambia has little industry, substantially related to the processing of peanuts and the production of other foodstuffs, as well as textiles and footwear; furthermore some wood products. In connection with the expanding tourism sector, a significant building industry has emerged.

The Gambia has few natural resources, but in 2004 discoveries of offshore oil were announced; mining licenses were awarded in 2006. Clay, sand and gravel are extracted for local use. Occurrences of ilmenite, zircon and rutile have been identified, and in 2008 President Jammeh announced that there were found viable deposits of uranium as well as gold, titanium, silicon and iron ore. 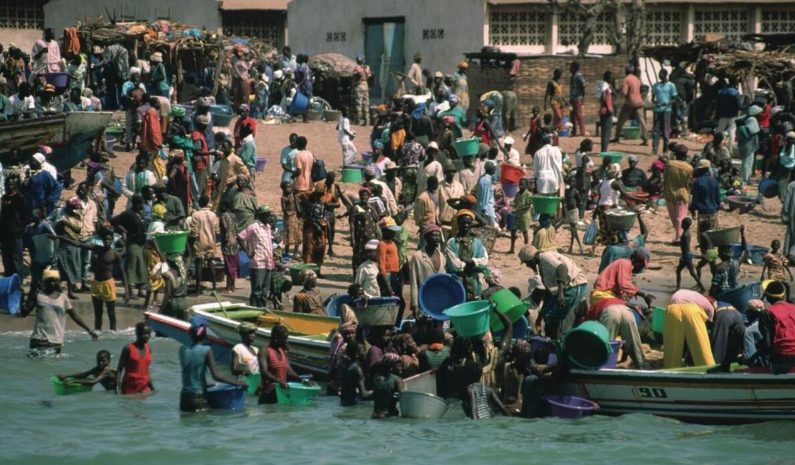 From the Atlantic coast, where fishing is conducted from open boats manned by 6-10 men.

The Gambia River has a potential for electric power generation, which can also generate profits for exports. The Gambia is not electrified; electricity is found in most major cities.

The Gambia has a significant deficit in the trade balance with foreign countries, which has partly been covered by large foreign borrowing and international assistance. The Gambia is one of the world’s most aid-dependent countries. The main export goods besides peanuts and peanut oil are fish and fish products. A significant part of the trade is done with neighboring Senegal, and the partly unofficial transit trade is one of Gambia’s most important industries. The EU, the US, China and Japan are also important trading partners. 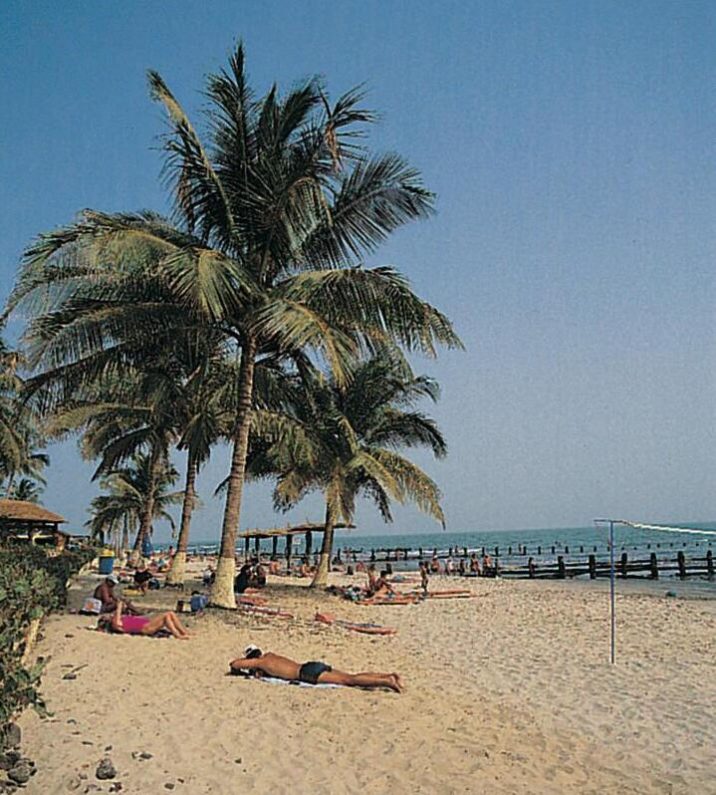 The Gambia River is the country’s most important transport year. There are more than 30 smaller ports up the river, among others. Kuntaur, 240 km above the estuary, which is the main export port for peanut production. Apart from the Trans-Gambia Road completed in 1958, the road network is little developed. There are few full-year roads and no railways. Banjul is the main port city. Here is also the international airport Yundum.