Economy and Business in Gabon


Rich mineral resources and timber resources have made Gabon one of the most prosperous countries in Africa, with one of the highest gross national income per capita in sub-Saharan Africa. Revenues are primarily due to the export of petroleum and timber, which remains the mainstay of the country’s economy. Gabon also has a low population. In 2004, crude oil exports accounted for about 40 per cent of GDP. Large parts of the country are covered by rainforest and are therefore not very suitable for agriculture. Lack of infrastructure makes much of the country difficult to access, and is a reason why only a limited extent of mineral resources are utilized. Gabon is rich in minerals, including petroleum; including manganese and uranium. At the same time, unavailability is a protection for the rainforest, which is also under severe pressure in Gabon, both by legal and illegal harvesting. 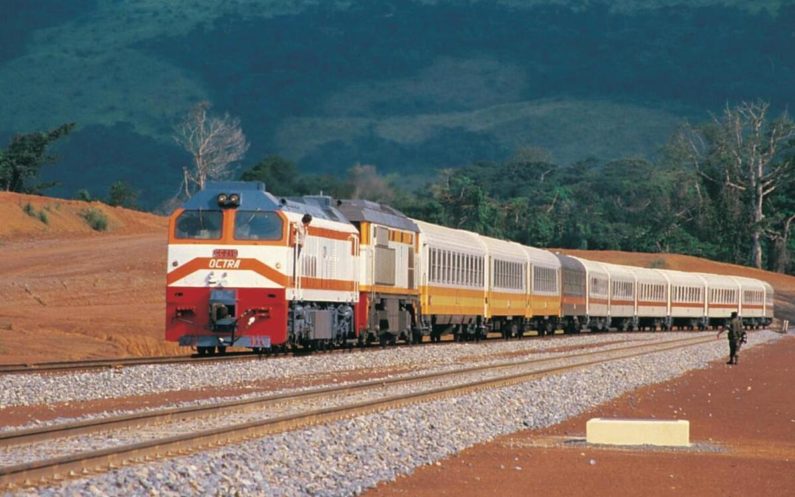 The strong dependence on petroleum exports has made the Gabonese economy partly dependent on the price fluctuations in the international markets, while the recovery has also varied. Following an upswing in oil production and export revenues in the 1970s, government spending and public investment, also financed by foreign loans, increased Gabon’s substantial debt burden – and further contributed to the country’s financial vulnerability. From the mid-1980s Gabon has therefore implemented several so-called structural adjustment programs. Following the 1994 devaluation of the multinational CFA franc, which is directly linked to the French franc, a further economic recovery program was implemented. From the 1990s a number of state and semi-state companies have been privatized, including power companies and railways.

High export earnings and high average GDP despite; wealth is unevenly distributed and many live below the poverty line.

An estimated two percent of Gabon’s land area is cultivated, and agriculture is dominated by small self-storage farms, which include, among other things, flour bananas, cassava, taro and maize. Products for sale are especially palm oil, rubber, sugar, cocoa and coffee. Gabon is not self-sufficient in food, and about half of the food needs must be imported. Increasing migration to cities and towns has hampered attempts to increase food production, while at the same time hampering agriculture by inadequate infrastructure, and thus transport opportunities from the production areas to the markets. Part of agriculture consists of plantations, including palm oil, coffee, cocoa and sugar. These products and rubber are exported, but to a modest extent. The crops of coffee and cocoa dropped significantly from the late 1980s. Animal husbandry has traditionally been near impossible in Gabon due to the tsetse fly. 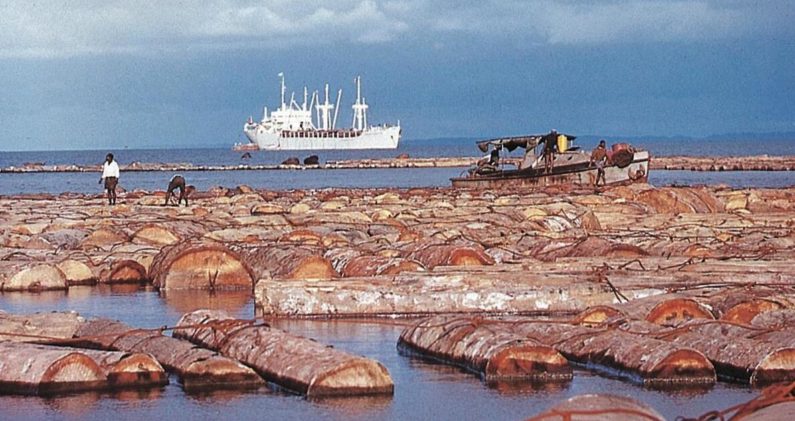 Forestry is an important part of Gabon’s business, and okoumte timber used for the production of plywood forms a large part of the country’s exports. From the port city of Port Gentil, where timber is ready for shipping.

Until the exploitation of Gabon’s mineral resources increased in the late 1950s, forestry was the country’s most important export industry. The tropical forest covers about 85 percent of Gabon’s land area, and the country is Africa’s fourth largest timber producer. Large parts of the country’s forest resources are still not utilized, while significant areas have been protected, and international pressure is being exercised to protect the remaining rainforest. Another limitation lies in the lack of infrastructure. The dense web of rivers is used to float the timber to the ports of the coast. A new railway, Transgabon, opened in 1986 a new area for timber operations. Gabon is the world’s largest producer of okoumé, a type of wood used especially in the production of plywood. Around 70 per cent of forestry exports consist of okoumé. The timber operation is highly mechanized, and is essentially run by European companies. Only a small proportion of the timber is processed in Gabon, and it is the authorities’ ambition to increase the proportion of processed timber.

The waters off Gabon are rich in fish and are milder than many other coastal regions in West Africa. The local fishing industry is small, with substantial craft fishing, and no processing. Plans have been made to build a processing plant in Port Gentil – as part of strengthening other parts of the economy as petroleum recovery declines. It is estimated that approximately 300,000 tonnes of fish and shellfish can be harvested annually, while catches at 2004 were only around 40,000 tonnes, while Gabon imports approximately 7,000 tonnes annually. The majority of the catch is taken by vessels from the EU. Gabon signed a 1998 agreement with the EU on fishing within the country’s 200-mile zone, extended in 2003.

The extraction of minerals has changed Gabon’s economy since the 1950s, laying the foundations for the country’s relatively high wealth. Today, petroleum is the most important mineral resource, accounting for about 40 per cent of GDP and up to 80 per cent of export value (2004). Gabon has the third largest oil reserves in sub-Saharan Africa (about 2.5 billion barrels per 2004). Production started near Port-Gentil in 1956 with strong growth from the late 1960s. Since then, several fields have been put into operation at the mouth of Ogooué and off the coast. One of the largest fields, land-based Rabi-Kounga, was commissioned in 1989. Reduced production in this field, among other things, led to increased exploration activity at the turn of the century and the opening of several new fields, both offshore and onshore. Production and revenues have varied greatly, and reached a peak of 371,000 barrels per day in 1997, after which it dropped to around 290,000 barrels in 2003. With known reserves and recovery rates as in 2004, the country’s deposits will end in 2012. However, it is believed that new ones will be made discoveries, including in the disputed border areas with Equatorial Guinea (Corisco Bay). In 2004, the two countries agreed to jointly explore deposits there. Gabon left OPEC in 1996, partly because the country considered that its quotas were too low. Over half of Gabon’s petroleum exports go to the United States, while French interests have been strong in exploration and recovery. In 2004, Gabon signed an agreement with China on Chinese assistance in the further development of the oil industry against guaranteed deliveries from Gabon. Gabon has one oil refinery in Port Gentil, and plans to build one more.

Gabon is one of the world’s largest manganese producers, and the deposits at Moanda, in the southeastern part of the country, are about 45 million tonnes. Gabon’s manganese deposits make up about ¼ of the world’s known reserves. The mining operation started in 1962, and the ore was previously shipped via the port city of Pointe-Noire in Congo. A new plant for shipping manganese ore was completed in 1988 at Owendo near Libreville, which is the end point for the Transgabon railway. In 1990, Gabon became the world’s largest exporter of manganese ore (ahead of South Africa).

Gabon was also a major producer of uranium for several years. The deposits are located at Mounana, where the extraction began in 1958. Production declined over the 1980s, until it ceased in 1999. Large iron ore reserves have also been identified, including about 850 million tonnes in the Belinga district in the northeast. Low prices on the world market have made little use of these resources. The country has proven resources also from a number of other minerals, including lead, zinc and phosphate; some gold and marble are mined. Chinese interests have been licensed to extract iron ore deposits in the north of the country. 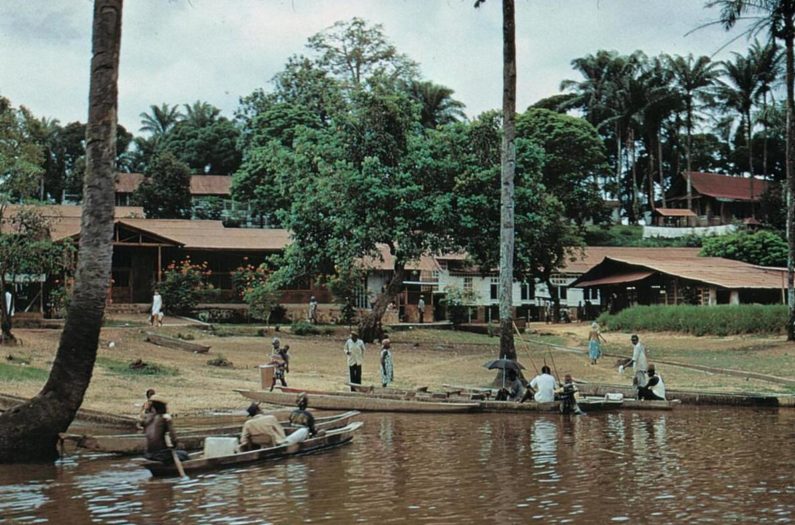 From the Albert Schweitzer Center in Lambaréné by the river Ogooué. The country’s communications network is little developed, and the rivers are important transport routes where they are navigable.

Gabon’s industry, beyond the petroleum sector, is small, mostly with the production of some consumer goods, as well as some processing of oil and timber.

Gabon has large hydropower resources, which in 2016 accounted for 41 percent of the electrical energy produced. Fossil energy sources, mainly natural gas, accounted for 58 per cent.

Thanks to petroleum exports, Gabon has a significant surplus in its foreign trade, albeit strongly fluctuating, depending on the price of crude oil on the world market. In the early 2000s, crude oil and oil products accounted for nearly 80 percent of export revenues; other important export goods are manganese and timber. The United States and France are the most important export markets, while China is becoming an increasingly important market than before after a fixed oil supply agreement was signed.

Imports include machinery, transport equipment and food products, with France and the United States as the main supplier countries. Despite the surplus in foreign trade, Gabon has taken up large loans in France and other EU countries, including to finance the construction of the Transgabon railway, and foreign debt has become a serious burden on the country’s economy.

Gabon’s economic development has been hampered by difficult communication conditions. The country’s densely wooded and hilly terrain, the sparse settlement and the economic dependence on timber that could flow down to the coast have not encouraged road and rail development.

The road network is of a low standard and cannot be used for heavy transport. In the 1990s, a major program was started to improve the road network, which, however, is still considered inadequate. Large parts of the road network are useless during the rainy season.

The new Transgabon railway was built from 1974 from the port city of Owendo near Libreville and inland. The route to Booué (338 kilometers) was completed in 1983 and the connection to Masuku (formerly Franceville) was opened in 1989. A line connecting Booué to the iron ore fields in Belinga in the north (235 kilometers) was shattered due to lack of funding. The railway is one of the largest public investments in Gabon, and has opened previously almost inaccessible parts of the country.

Aviation plays a major role in domestic transport; International airports can be found at Libreville, Port-Gentil and Masuku. Air Gabon, established in 1977, is responsible for both domestic and international traffic.

The main port cities are Port-Gentil, which mainly handles the export of oil and petroleum products, and Owendo 15 kilometers from Libreville. A new plant for the export of ore, with a capacity of two million tonnes of manganese a year, was completed here in 1988. Owendo will also be the port of export for the iron ore from Belinga, when the ore mining must commence.