Economy and Business in Ethiopia


Ethiopia is one of Africa’s largest and most resource-rich states, yet one of the world’s economically least developed countries. Poorly developed infrastructure and a small modern sector have hampered the exploitation of the significant mineral resources, while at the same time hindering agricultural development. This was for a long time subject to a feudal structure, which in the 1970s and 1980s was partly replaced by an unsuccessful government commitment to large state use. Much of the land is not reached through the road network, and much of the agriculture produces for self-storage.

Ethiopia has the lowest urbanization rate in Africa, and parts of the country are swampy and inaccessible; others are overpopulated in relation to the basis of life – with an extensive degree of ecological damage, especially through deforestation and erosion. Many years of war in several parts of the country, as well as several periods of severe drought, have contributed to a lack of economic and social progress. Ethiopia has been through decades of more or less uninterrupted war. The wars have mainly resulted in large expenditures for military purposes, to a lesser extent destruction. 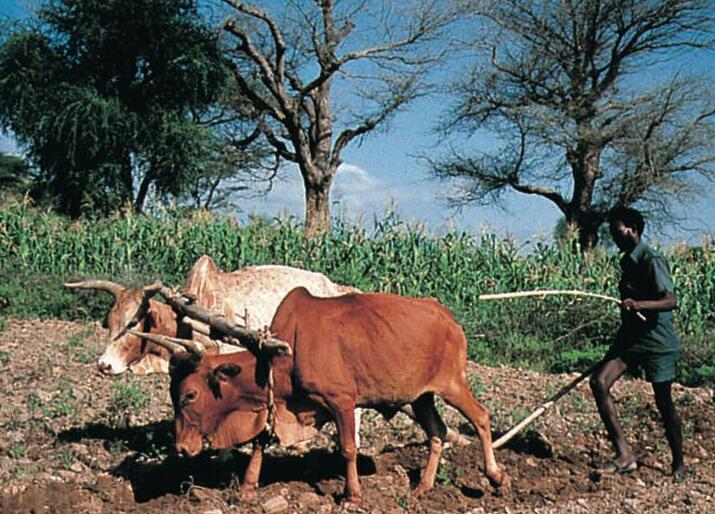 After several drought disasters, it has been important to start farming. The relief organizations spent considerable resources on re-cultivation projects in 1986.

Lack of stability in several neighboring countries ( Somalia, Sudan, Djibouti ) has also affected Ethiopia. The military dictatorship’s policies of the mid-1970s contributed to the economic problems, and several major drought disasters (including 1984-85, 1991-92, 1994, 1999 and 2003, but most importantly in 1984-85, when an estimated one million people died ) has hampered the development of the country. After the famine disaster in the mid-1980s, the authorities launched a controversial migration program, which moved farmers from the overpopulated and eroded areas of the north to more gritty areas in the south.

The Soviet- influenced economic policy of President Mengistu Haile Mariam was replaced by a more open policy after its fall. In the second half of the 1990s there was economic growth, partly due to good crops and higher prices for coffee. Coffee accounts for about 60 percent of Ethiopia’s export revenue. In total, about 90 per cent of agricultural export revenues come. One of the reasons for the growth in the coffee sector was the economic liberalization that was gradually implemented in the 1990s. The privatization of state agriculture in both agriculture and industry is an important part of the liberalization program. Fighting public corruption is a priority. 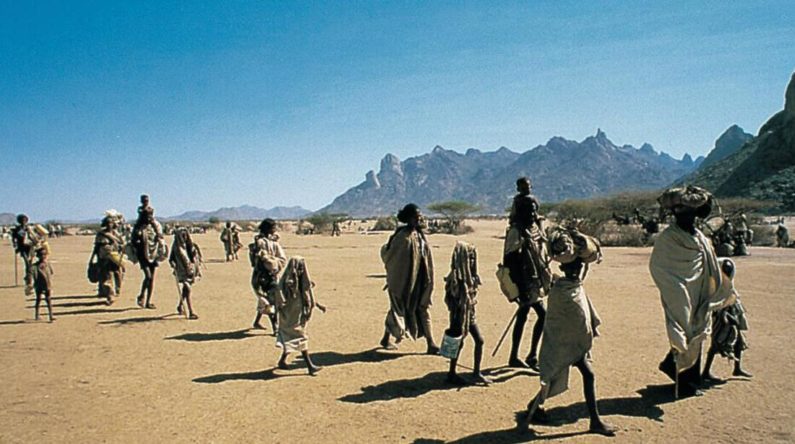 People from Tigray Province fled due to drought in 1984-85, when approx. 1 million Ethiopians lost their lives.

Eritrea was an Ethiopian province after World War II, until the country became independent in 1993. Economic relations continued to be tight, and in the 1990s several economic agreements were signed between the two countries, including in 1995 to remove agricultural tariffs. and industrial goods. It was long believed that an economic union between the two states would be established, but the relationship gradually deteriorated, and especially from 1997, when Eritrea introduced its own currency to replace the Ethiopian birr, which was also used to trade the two countries between. As a result of Eritrea’s detachment, Ethiopia lost access to the sea and relies on ports in neighboring countries for its trade with the outside world. After the war with Eritrea, Ethiopia has ceased to use the Eritrean ports Assab and Massawa, and has directed their foreign trade to Djibouti – and is looking at the possibilities of using Mombasa in Kenya.

Through voluntary organizations (not least the mission) and international organizations for decades, Norway has provided development assistance to Ethiopia. Since 1995, the country has had the status of priority country for Norwegian development cooperation. Central to the cooperation in the 1990s was specific efforts to strengthen the development of democratic governance and human rights, as well as measures for social development and food security. In the 2000s, this was continued, in addition to the focus on peace and reconciliation after the war with Eritrea.

Although the new ruling party EPRDF privatized much of the business world when they took power in 1991, the state has played an important role in Ethiopia’s economic policy. The vast majority of important enterprises, including banks, are state-owned. State-controlled economic policy became very clear through the introduction of the developing-state ideology of the 2010 century. The first 5-year Growth and Transformation Plan (Growth and Transformation Plan, GDP I) was launched in 2010, and emphasized the development of public communications and infrastructure. Much of this was financed by loans and assistance, especially from China, and the idea was to facilitate foreign investment. Extensive development has meant that Ethiopia has experienced significant economic growth over the last couple of decades – some upwards of 12 per cent. At the same time, marked inflation was seen in the same period.

A new Growth and Transformation Plan (GTP II) was launched in 2015 – until 2020. This economic policy has contributed to a dramatic expansion of road networks and other infrastructure, but widespread political turmoil in connection with ethnic conflicts has led foreign investment to waited for him.

Ethiopia is a prominent agricultural country, and agriculture the dominant economic sector, of which approximately 85 per cent of the population is directly or indirectly dependent. Until the revolution in 1974, agriculture was characterized by feudal property and production conditions. These were changed as a result of the economic reforms of the mid and late 1970s, when investments largely concentrated on highly mechanized state farms, which, however, did not produce the expected return. Agriculture accounts for about 90 percent of the country’s export revenues, of which coffee alone accounts for about two-thirds of the total export value.

Agriculture produces substantially for local consumption, and yields are generally low. The operating methods are not modernized, and faulty communications make it difficult to reach the farmers – and for the farmers to get their products to the markets. Droughts, and usually inadequate rainfall, limit crops; only about 4 percent of the arable land is partially irrigated. The most important local cereals are teff and sorghum. In addition, barley, corn and wheat are grown, as well as a good deal of oilseeds, vegetables and fruits – as well as coffee, which is the most important export product. Other important export crops are cotton and sugar cane, as well as the narcotic plant qat. The livestock is large, but does not produce a great economic return, although cattle, hides and skins are important export goods.

In recent years, Ethiopia has invested heavily in hydropower development. The construction of the dams Gilgel Gibe I (2004), II (2010) and III (2016) contributed significantly to Ethiopia’s energy production, and in 2017 hydropower accounted for over 93 per cent of the country’s electricity production. In 2011, the construction of The Grand Ethiopian Renaissance Dam (GERD) started, a dam that will become Africa’s largest. This involves the containment of the Blue Nile flowing from Lake Tana, and the project has created considerable disagreement with Egypt. Most of the electricity produced here is for export.

Ethiopia has for several years been trying to drill for oil and gas, especially in the Somali region (Ogaden). Gas was found in 2017, and extraction of these deposits will start at the Calub and Hilal fields in 2019. All gas will be exported to China. Ethiopia is dependent on oil imports, and most of this comes from the Gulf states. Geological conditions indicate opportunities for oil deposits, especially in the southwest, near the oil fields in Sudan.

Ethiopia is believed to have large mineral deposits, which are only to a limited extent mapped, and the recovery is very small; the sector contributes only around 1 per cent of GNI. Small quantities of gold, platinum, salt and potassium chloride (potash) are recovered, as well as lime and marble. There are also known deposits of iron ore and coal.

The industry, which accounts for about 10 per cent of employment, comprises substantial food industry and the production of textiles and other consumer goods for the local market. The most important industrial center is Addis Ababa.

Ethiopia normally has large trade and current account deficits abroad, partly due to large military costs over extended periods. The deficit has been partially covered by foreign aid, and Ethiopia is one of the most dependent countries in the world. At the same time, the country has also taken out large loans abroad.

Exports are dominated by agricultural products, with coffee, hides, skins and vegetables being the main export products, of which coffee accounts for around two-thirds of the value most years. Fluctuations in the price of coffee in the international markets thus create uncertainty in financial planning. From the 1990s, the focus was on export-oriented production of fruits and flowers.

Ethiopia’s topographical conditions make the development of a modern transport network costly and difficult. A French-built railway line links Addis Ababa to the port of Djibouti, which is an important transit port for Ethiopian trade. The course is jointly owned by Ethiopia and Djibouti from 1982 and has since been refurbished – just like the port of Djibouti. After Eritrea gained independence in 1993, Ethiopia lost access to the sea, but continued to exploit the ports of Assab and Massawa on the Red Sea. This ceased after the 1998 Ethiopia-Eritrea war, and Ethiopia directed its foreign trade to Djibouti. In 2018, Ethiopia entered and invested in the development of the port of Berbera, Somaliland, and the country has also made greater use of the port in Port Sudan. The peace agreement with Eritrea in 2018 has facilitated trade via the port of Assab in Eritrea.

The road network has been undergoing rapid development over the last couple of decades, largely financed by foreign loans. A main road connects Addis Ababa to Nairobi in Kenya and forms part of the Trans-East African Highway. Ethiopia is also part of the Lamu Port-South Sudan-Ethiopia-Transport (LAPSSET) project, which involves oil pipeline from South Sudan and the development of road networks for closer links between Ethiopia, Kenya, Uganda and South Sudan. The most important international airports are at Addis Ababa and Dire Dawa. 25 smaller airports serve domestic traffic.