Colorado’s capital, Denver, is located on the Prairie Fringe – a plain at a dizzy height of 1,600 meters above sea level. It is surrounded by high mountains and thus offers a really attractive panorama of this mighty mountain range. Therefore, Denver is also the ideal springboard for the Rocky Mountains. But the city also has a lot to offer visitors – in addition to the steel and glass skyscrapers, there are also remnants from the era when Denver was a gold rush camp.

Denver has a long, interesting history. During the great gold rush of 1858, it was a camp for thousands of prospective prospectors. By the end of the century, Denver was one of the most elegant cities within a 600-mile radius. Today, it’s not only the gateway to snowy ski resorts, but also one of America’s most charming, bustling cities, whose appeal lies in its blend of stunning natural beauty and refined art.

Location and Size
According to timedictionary, Denver is the capital of the US state of Colorado and is located at the eastern foot of the Rocky Mountains at an altitude of 1,600 m. A searchlight aimed at the 13th step of the Capitol marks this point. Denver is therefore also called the “Mile High City”. The city covers an area of ​​400 km².

Population
Approximately 600,000 people live in downtown Denver, but the metropolitan area has more than 2.5 million, which is about half the population of all of Colorado.

Arriving
by Air
Denver International Airport (DEN) is located 27 miles northeast of Denver. Non-stop flights from Frankfurt, London and Reykjavik connect the city to Europe. Many US carriers also offer connections from several European cities with a changeover on the east coast.

Climate
One of the biggest surprises for visitors to Denver is the climate here: very little rainfall (between 300 and 400 mm annually) and more than 300 days of sunshine a year (that’s more sunshine hours a year than in Miami or San Diego) make the city a ‘fair weather paradise’ with extremely frequent blue skies.

Winters are cold , dry and often sunny. At night, temperatures often drop to -10 °C, at noon they usually reach above freezing point 0 C. Cold air rushes from the north, which bring temperatures below -20 °C and heavy snowfalls, occur occasionally. Snow rarely stays in Denver for long.

In the summer , Denver enjoys low relative humidity, making for beautiful, sunny days and cool evenings. The average daily temperature in August is 30°C. After sunset, it cools down quite quickly and temperatures drop to 10 to 15 degrees. The mild weather is partly due to the city’s high altitude. Only in the afternoon there may be brief thunderstorms, but they usually pass quickly.

Sports
Denver is one of the few cities that is home to professional teams from all four major American sports . There’s the Colorado Rockies (baseball) at Coors Field, the Denver Broncos football team at the massive Invesco Field at Mile High Stadium, the Colorado Avalanche ice hockey team, and the Denver Nuggets (basketball) at the Pepsi Center. The Colorado Rapids professional football team and the two lacrosse teams Colorado Mammoth and Colorado Outlaws also play their home games in Denver.

Each August, downtown Denver also hosts the final leg of the USA Pro Challenge, a pro cycling event with a colorful program of performances, rock concerts and many other attractions. Smaller as well as larger international golf tournaments, such as the Solheim Cup, also regularly take place around Denver in the summer months.

Restaurants and Bars
Denver is a gastronomic paradise , not least because of the historic Larimer Square near Sixteenth Street. Places like the Mediterranean-inspired Rioja or the modern Mexican restaurant Tamayo, whose chefs, like many others here, are from New York, are among the culinary highlights. Master of modern cuisine Kevin Taylor owns excellent restaurants in the Opera House and a charming boutique in the Hotel Teatro. The Buckhorn Exchange, which is well worth seeing, also offers other culinary delights with its huge steaks from buffalo and red deer.

Wynkoop is America’s largest beer hall and offers a range of home-brewed British beers and signature snacks such as fish and chips. With its trendy pool hall on the first floor, the Wynkoop is the pioneer for the scene in LoDo and thus also determined the city’s image today. There are now well over 50 smaller breweries around downtown Denver. In the meantime, however, there are also more and more excellent distilleries and a good dozen winegrowers.

What can we do here?
You should take a walk along the South Platte River to the Downtown Aquarium – probably the only aquarium with tigers. The outdoor outfitter REI next door with its impressive building is also worth a visit. You should also visit America’s only downtown amusement park, Elitch Gardens . It offers the entire range from roller coasters to water parks. A bike path also runs alongside the river and is part of Denver’s 1,000-kilometer bike path network. If you don’t want to rent a bike for several days, the B-Cycle bike sharing system is an ideal solution.

With over 80 stations, B-Cycle offers a dense network of stations in many corners of Denver, so that you can easily reach all relevant areas. Participation in the program costs USD 8 for 24 hours, the first half hour is free of charge – this makes the B-Cycles ideal for using as a “transfer vehicle”.

You can shop in the designer shops of upscale Cherry Creek, but also in the numerous galleries and boutiques of the colorful neighborhoods. Denver also has another architectural highlight: The Museum of Contemporary History is the work of London architect David Adjaye, bringing a shining symbol to LoDo. 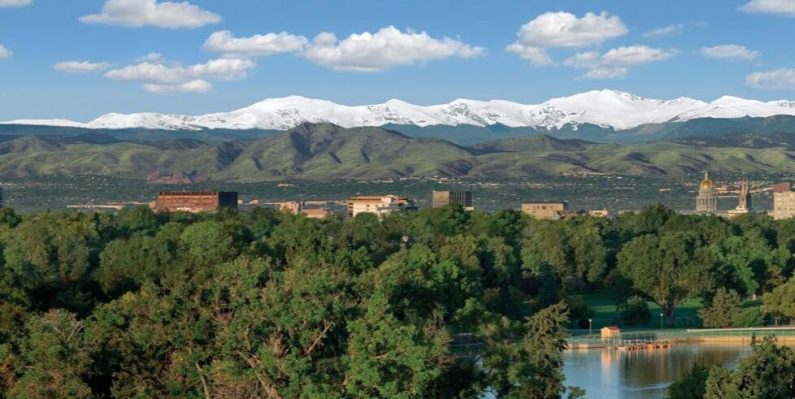