The Council of Europe is a treaty, intergovernmental organization with 47 Member States, mainly European. The Council’s most important task is to protect human rights, democracy and the rule of law.

This is done, among other things, through agreements and conventions. Under the auspices of the Council of Europe, 221 conventions and protocols have been negotiated with their own control mechanisms for assessing how the parties comply with the obligations.

With the exception of Belarus and Kosovo, all European countries are members of the Council of Europe. Check here to find all countries in the European continent. The Vatican City is not a member either.

Since 2019, Marija Pejčinović Burić from Croatia is the Secretary General of the Council of Europe, as the second woman and first from a country outside Western Europe. She succeeded Norwegian Thorbjørn Jagland, who was Secretary General from 2009 to 2019.

The Council of Europe was established in Strasbourg by ten western European states in 1949. The creation came on the back of the Cold War. Developments in Eastern Europe went in an anti-democratic direction, and the countries of Western Europe found it necessary to organize themselves against Soviet expansionism.

The evolution of the number of member countries since its establishment in 1949 illustrates the political changes in Europe from the late 1980s, as more and more countries have met the Council of Europe’s strict requirements for the protection of human rights, democracy and the rule of law. Achieving membership in the Council of Europe has been an important milestone for many of the former communist states.

As the only non-European country, Georgia joined in 1999 and Armenia and Azerbaijan in 2001.

Belarus applied for membership in 1993, but did not fulfill the obligations of participation, partly because the death penalty is still practiced, which is contrary to the European Convention on Human Rights. The Council of Europe has repeatedly called on the Belarusian government to introduce a moratorium on the death penalty as a first step towards dismantling the system of capital punishment.

Kosovo has not applied for membership because the country is not recognized by neither Russia nor Serbia.

The ministerial committee, which is the organization’s political body, holds an annual meeting at the foreign minister level and can otherwise come together at political level as needed. Through the Permanent Representatives of the Member States, the Committee of Ministers meets at ambassador level every week.

The issues in the ministerial committee are prepared by a number of thematic reporting groups, with representatives of the permanent delegations of the member states participating. Expert groups are established in a number of disciplines.

The chairmanship of the Committee of Ministers goes on a tour of the member states every six months in alphabetical order according to the English alphabet, every May and November.

Also important are the Ministerial Conferences organized by the Council of Europe. 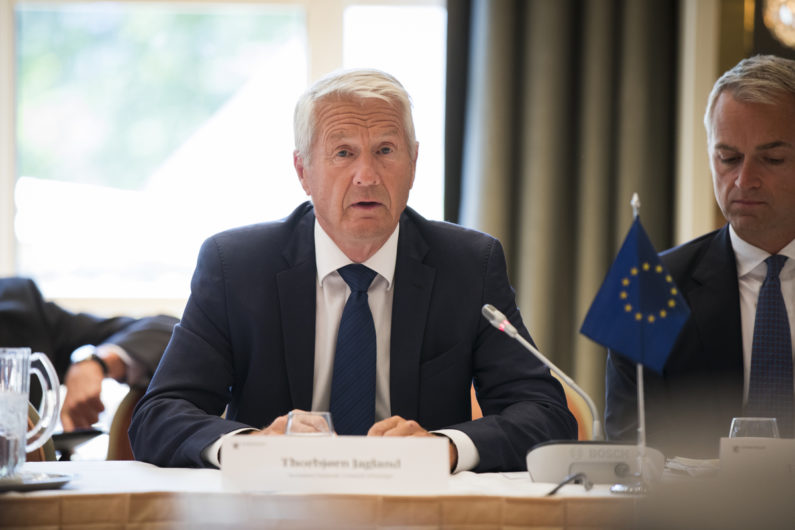 Thorbjørn Jagland from Norway was the Secretary General of the Council of Europe from 2009 to 2019.

The Parliamentary Assembly (PACE) has four sessions a year, each one week. The assembly includes 324 representatives, with just as many deputy representatives.

The Parliamentary Assembly plays an active role in the Council of Europe and contributes to providing guidance for the cooperation through various recommendations.

Rik Daems from Belgium is president of the parliamentary assembly.

Since 1975, Parliamentary Presidents of the Council of Europe Member States, as well as from several neighboring and observer countries, have held biannual meetings within the framework of the European Conference of Presidents of the European Parliament (ECPP). The conference takes place alternately in Strasbourg and in one of the member countries.

Congress of local and regional authorities

Another important forum is the Congress of Local and Regional Authorities, which was established in 1994. The congress, which includes 318 representatives and 318 deputy representatives, represents the over 200,000 regions and municipalities in the 47 member states.

The congress, which has two plenary sessions per year, works to promote local and regional democracy and self-government on the basis of, among other things, the European Charter of Local Self-Government. In addition to plenary meetings, the work takes place in two chambers, one for local and one for regional authorities.

Anders Knape from Sweden was elected President of Congress in November 2018 for a term of two years.

The European Court of Human Rights is a central body of the Council of Europe. Here, all the 830 million inhabitants of the 47 member states can have their case tried, if they believe that the domestic court has made decisions that violate the European Convention on Human Rights.

The Court of Justice in Strasbourg settles complaints with binding effect on the states. Member States may also appeal to other courts before the Court, although this is rare.

Since its establishment in 1959, it has delivered over 18,000 judgments on violations of the European Convention on Human Rights (ECHR). The Court is responsible for significantly developing this Convention since it came into force in 1953.

The Court consists of 47 judges, one from each Member State, elected by the Parliamentary Assembly. However, the judges are not representatives of any state, but independent. The mandate of a judge is nine years and is not renewable.

Linos-Alexandre Sicilianos from Greece was elected President of the Court in 2019.

The Commissioner position was established in 1999 to strengthen human rights work in the member states. The Commissioner is elected by the Parliamentary Assembly for a term of six years.

Dunja Mijatović from Bosnia and Herzegovina took over as Human Rights Commissioner in April 2018. She is the first woman to hold this position.

The European Commission for Democracy through Legislation, also called the Venice Commission, was established in 1990 to support the process of democratization in the Central and Eastern European countries by providing legal assistance in drafting the Constitution and other central laws.

The Commission has 61 member countries. It consists of all 47 countries that are members of the Council of Europe, as well as the following 14 countries: Algeria, Brazil, Chile, Costa Rica, Israel, Kazakhstan, Kyrgyzstan, Kosovo, Morocco, Mexico, Peru, South Korea, Tunisia and the United States. Belarus is an associated member. The following states are observers: Argentina, Canada, Japan, Uruguay and the Vatican City.

In 1956, the Council of Europe established its own European social development bank based in Paris. This is the only financial institution in Europe with a purely social purpose. The bank has 41 member countries: 40 of the Council of Europe members and Kosovo. In 2016, the bank provided loans totaling EUR 3.451 billion for 35 projects. Many of the projects were a result of the flow of refugees to European countries. Rolf Wenzel from Germany has been the bank’s governor since 2011.

The Council of Europe has held three summits at the head of state and government: in Vienna in 1993, in Strasbourg in 1997 and in Warsaw in 2005.

In particular, the Council of Europe has strengthened European cooperation in the cultural, social and legal areas.

The most important convention concluded within the framework of cooperation in the Council of Europe is the European Convention on Human Rights. Other conventions may be mentioned

Following the so-called Shasmin revolution, the Council of Europe was engaged in 2011 in aid to Tunisia in connection with the conduct of free and independent elections in the country. The organization is also working to promote democratic development in other North African countries.

After the Ukrainian parliament deposed Viktor Yanukovych as the country’s president on February 22, 2014, the Council of Europe has been particularly involved in the work on new constitution and new electoral law for Ukraine.

Following the attempted coup d’état in Turkey in July 2016, former Secretary General Thorbjørn Jagland visited the country several times, stressing that the arrested must be treated fairly and that the Turkish regime must comply with the provisions of the European Convention on Human Rights. The Venice Commission has stated that the proposal for amendments to the Turkish Constitution, which was voted majority on the April 16, 2017 referendum, represents “a dangerous setback for democracy”. On April 25, 2017, the Parliamentary Assembly decided to launch an investigation into Turkey’s democratic institutions.

Norway and the Council of Europe

Supreme Court Judge Arnfinn Bårdsen has been the Norwegian judge in the European Court of Human Rights since January 2019.

Council of Europe under Thorbjørn Jagland

As Secretary General in the period 2009–2019, Thorbjørn Jagland implemented reforms in the Council of Europe with the aim of making the organization more effective in its efforts to develop democratic security and stability in Europe. Jagland also took the initiative to step up the legal assistance of several member states, including Ukraine, to revise national legislation in line with the Council of Europe’s mission to protect human rights, democracy and the rule of law. The waiting list for complaints in the European Court of Human Rights was reduced from almost 140,000 in 2009 to just over 56,000 as of 1 January 2019. However, Jagland’s time as secretary general was not entirely uncontroversial, and he received criticism from certain teams in 2019 for his proposal to give Russia the right to vote in the parliamentary assembly.

The official languages ​​of the organization are English and French.

Member State of the Council of Europe