Religious freedom prevails. In the 2016 census, two-thirds of Australians stated that they were believers, about half of whom were Christians. One third of the residents did not believe in any religion. As immigration increases, the number of Muslims and Buddhists in particular has increased, but Hinduism has also gained more followers. At the same time, in recent decades the proportion of Christians has steadily declined.

The largest is the Catholic Church with an Irish background, followed by the Anglican Church. The British-Irish influence has also given rise to Presbyterian and Methodist congregations. Catholics increased in number during the second half of the 20th century as a result of immigration from southern Europe.

In recent decades, the Catholic Church in the country has been shaken by an extensive pedophile scandal. Over 4,000 people have testified in an ongoing state investigation that they were sexually abused between 1950 and 2015 and close to 1,900 church employees have been identified as guilty.

The religion of Aborigines is based on the notion of dream time. It is a central concept that at the same time signifies an ancient time when mythical beings created the land and a now existing spiritual world. Various natural formations are traces of these creatures. Places where they are are sacred and there are various rituals and dances performed. Aboriginal holiest cult site, the 335-meter-high rock monolith Uluru (also called Ayers Rock) in the Northern Territory, was returned to its native residents in 1985. It is now rented out to the state and is one of Australia’s most visited tourist attractions. 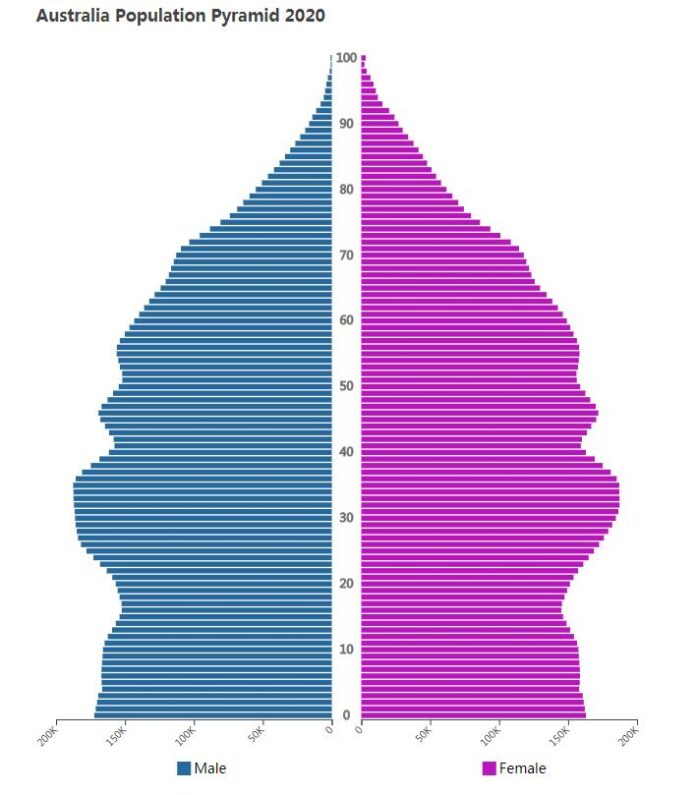 Totemism (a symbolic link between a group of people and an animal or plant species) and initiation rites are common.

Several states in Australia are ravaged in the second half of November by extensive forest fires, according to estimates the worst in many decades. Six people have lost their lives, all in the hardest hit state of New South Wales, where even six hundred residential houses have been burned down and 1.6 million hectares of land destroyed. Queensland and Victoria have also been ravaged by fires. In New South Wales, it is mainly drought and lack of rainfall that is behind the severe fires. According to the State Institute of Meteorology, climate change has contributed to increasing the extent and frequency of fires. The press has increased on the Conservative government to reduce the use of fossil fuels and cut greenhouse gas emissions. However, Prime Minister Scott Scott Morrison argues that his government is doing enough to meet climate change.

Several major magazines publish front pages that appear to have been censored with black overlays and stamped in red with the text Secret. The whole thing is a protest against new laws that have been introduced to protect national security in recent years. The laws are considered a threat to scrutiny journalism as they make it difficult to access “sensitive” documents. In addition, journalists in their work are hindered by laws about slander.

According to the government, three Australians, two women and one man, have been placed in prison in Iran. Recently, Tehran authorities have seized Western citizens with dual citizenship. The arrest of Australians is believed to be linked to Prime Minister Scott Morrison’s announcement a few days ago that Australia will participate in the US-led effort planned in the Strait of Hormuz. Australia will, among other things, send a warship and surveillance flight to the area. In mid-September, representatives of the Iranian judiciary state that the three Australians are suspected of espionage. Two of the arrested Australians will be released in early October.

According to Australian Foreign Minister Marise Payne, the writer and academic Yang Henjun, a former Chinese diplomat and now Australian citizen, has been formally arrested in China on suspicion of espionage. Australia has since been arrested in China in early January this year trying to get the popular blogger and critic of China’s political system released.

The state government in Queensland is making a decision that will allow construction of a much-debated coal mine near the Great Barrier Reef to begin. The multinational India-led mining company Adani is behind the project, whose consequences for the environment have been debated. Environmental activists believe that the mine is threatening biodiversity and could have a negative impact on the Great Barrier Reef. Those who are positive about the mine believe it has great financial significance as it will lead to many jobs and infrastructure expansion in Queensland while increasing Australia’s coal exports by 20 percent.

Former MP Ken Wyatt is appointed Indigenous Minister by Prime Minister Scott Morrison. Wyatt becomes the first in his post to be Aboriginal himself. In 2010, Wyatt became the first member of the lower house to have Aboriginal descent.

After the surprising election loss on May 18, Bill Shorten decides to step down as Labor Party leader. Anthony Albanese is elected a new leader for Labor a week later. He has extensive experience as a Member of Parliament and as Minister in Labor Governments.

Opinion polls before the parliamentary elections predict a change of power for the first time in six years. But the result is instead a surprising victory for the government coalition between the Liberal Party and the National Party under the leadership of Prime Minister Scott Morrison. The government parties manage to secure a scarce majority of their own in the House of Representatives.

Wikileaks founder Julian Assange, an Australian citizen, has been arrested after spending seven years at Ecuador’s Embassy in London. He was granted asylum by Ecuador’s President Rafael Correra in 2012. It is unclear why Ecuador has chosen to withdraw his political asylum so that British police can arrest Assange. A British court finds that Assange is guilty of having been expelled from the bail. Assange risks being sentenced to one year in prison. At the same time, US authorities are trying to get him extradited because of suspicions that he assisted former whistleblower Chelsea Manning in 2010.

Elections will be held in May

Prime Minister Scott Morrison announces that parliamentary elections will take place on May 18. The election movement has already started with election ads in different channels. The Labor opposition has for a long time been ahead of the government parties in the opinion polls. The Liberals and Morrison are trying to recruit voters by pointing to the country’s strong economy. Climate problems are also believed to be an important choice issue.

the 13th of March

Cardinal George Pell, former chief financial officer of the Vatican, is sentenced to six years in prison for sexual assault against two corpses. The crimes were committed when Pell was Archbishop of Australia. Pell has appealed against the judgment (see also June 2017).

Australia and Indonesia sign a bilateral trade agreement, which means that Australia will gradually abolish all import duties on Indonesian goods and Indonesia gradually removes 94 percent of its customs duties. The agreement is expected to increase trade between the two countries: Australia hopes to export more beef and sheep products, while Indonesia wants to sell more cars, textiles, timber, electronics and medical equipment to the neighboring country. In 2017, trade between the two countries amounted to just under $ 12 billion.

Prime Minister Scott Morrison announces that the much-debated refugee facility on Christmas Island will reopen, just a few months after it closed (see October 2018). The reason, according to Morrison, is that the recently adopted law on refugees’ right to seek medical care in Australia will increase the number of people trying to enter the country illegally.

For the first time in many decades, the House of Representatives voted in favor of a law that the incumbent government opposes. The law is adopted by 75 votes in favor – in addition to Labor, it is also supported by supporters of the Greens and independent members – while 74 votes against. Laws give refugees who are in camps at Nauru and Manus in Papua New Guinea the right to be brought to Australia for medical care if doctors recommend this. Recently, the media has reported on mental illness among children in the camps, abuse and other problems and a few years ago a camp resident died after not receiving adequate medical treatment for a foot injury. After the law was passed, demands from, among other things, the opposition that Prime Minister Scott Morrison and his government resign as the House of Representatives went against the government’s line.

Yang Hengjun, author, democracy activist and former Chinese diplomat, is abducted by the Chinese security service during a trip to China. Yang has been an Australian citizen since 2000, but currently works at Columbia University in New York, USA. According to a spokesman for the Chinese government, Yang is suspected of being involved in criminal activities that threaten China’s national security. The Australian government demands that China show “transparency and justice” in the case.

The criticized Maribyrnong reception in Melbourne is closed. Migrants who do not have identity documents have been locked in at the reception waiting to have their cases handled. During the more than a decade that reception has existed, it has been criticized for the harsh treatment of migrants. Several hunger strikes have been held there and the Australian Human Rights Commission, a government agency, has reported violence in the context of rejections. Nearly 20 migrant centers have been closed over the past five years.