The industrial sector in Albania is small and usually outdated. The most important industries are mining and manufacturing of footwear and clothing.

The mining industry and simpler manufacturing industry that dominated during the communist era (1945–1991) collapsed during the 1990s. Growth in the now privately owned industry has since been quite strong, but it has been from a low level.

Mining production (see also Natural Resources, Energy and the Environment) has increased significantly thanks to foreign investments. The food industry is also important. Many new small and medium-sized companies have been created in the construction and textile industries. Not least, Italian entrepreneurs have started manufacturing footwear and clothing in Albania, attracted by cheap labor and the country’s proximity to the Western European markets. 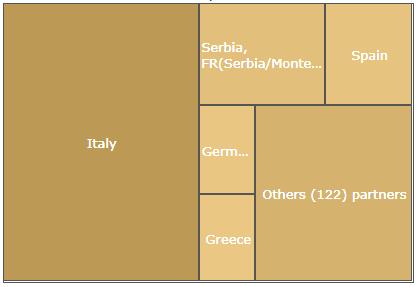 The construction industry has grown rapidly since the turn of the millennium. Lack of housing, large move-ins to the cities and extensive need for new roads and ports are reasons for this.

The mining, construction and manufacturing industries together account for a quarter of the country’s GDP.

The opposition alliance, which has boycotted Parliament for six months, re-emerges under tumultuous forms. A member throws eggs at Prime Minister Edi Rama when he gives a speech on recurring student demonstrations. Egg thrower Endri Hasa of the Democratic Party is banned for ten days. The students have been demonstrating for several weeks for lower tuition fees and greater resources for the universities. Like Endri Hasa, students have thrown eggs to show their displeasure.

Albania expels two Iranian diplomats who are declared undesirable in the country for security reasons. One of them is said to be Iran’s ambassador. The measure is believed to be based on diplomats’ actions against an Iranian organization. Albania has received, after a request from the UN and the United States in 2013, about 3,000 people related to the regime-critical movement People’s Mujahedin.

The police carry out extensive raids around the country against drug paraphernalia, in what is described as the largest effort so far of its kind in Albania. According to the Interior Minister, 1,500 police officers are participating for three days and four dominant drugs are broken up. Following the strike, an investigation is being launched by the mayor of Dürres, who is suspected of being involved in drug trafficking. The Opposition Party PD claims that the arrests prove that the ruling Socialist Party, which won a landslide victory in the 2017 election, buys votes through consultation with organized crime.

The gaming industry is limited

Parliament votes for a law that prohibits gambling at sporting events and restricts casino activity, in an attempt to combat the organized crime used by the gambling industry for, among other things, money laundering (see also March 2018). All game advertising is also prohibited. Casinos should henceforth only be allowed at larger tourist hotels. Prime Minister Edi Rama has tried to ban the gaming industry from fighting financial crime since he took office in 2013, but has previously failed to get a majority for it in Parliament. Now the opposition boycotted the work for several weeks and did not take part in the vote.

Ready for membership negotiations with the EU

The EU Council of Ministers decides that membership negotiations will begin with Albania and Macedonia in June 2019, subject to certain conditions. In the case of Albania, it is primarily a continuing struggle against organized crime and corruption.

Former Interior Minister Saimir Tahiri is placed under house arrest before a pending trial when he is suspected of, among other things, drug smuggling. During his time as Minister of the Interior in 2013–2017, Tahiri was behind a comprehensive police reform and a major security effort to overcome lawlessness in Lazarat and finally the extensive cannabis cultivation there.

In its annual enlargement report, the European Commission recommends that membership negotiations start with Albania and Macedonia. All EU states must provide clear signs for negotiations to begin. EU Foreign Minister Federica Mogherini also emphasizes that comprehensive reforms are needed to make membership a reality. The EU aims to possibly include new members in 2025, but all border disputes must be resolved first. Serbia and Montenegro are considered to be first in line, both countries have already begun membership negotiations.

Albania expels a Russian diplomat as a result of a nerve poisoning attack on a Russian former spy and his daughter in the UK in early March. It is taking place in concerted action with some 20 countries, mainly in the EU, in solidarity with the British government accusing Russia of being behind the attack. In total, over 100 Russian diplomats are expelled, 60 of whom are from the United States. Moscow denies all involvement in the poison attack and threatens with countermeasures.

The European Football Federation Uefa has shut down Albania’s most successful football team, Skënderbeu, for ten years due to extensive match fixing. The team is charged with links to organized crime and is also required to pay a million euros in fines. Skënderbeu is said to have made big money in 53 rigged matches between 2010 and 2016.

Protesters demand the resignation of the government

Thousands of opposition supporters demonstrate in Tirana demanding the resignation of the government. The protesters accuse the Rama government of having links to organized crime and drug smuggling and to making the country poorer and more corrupt. Some opposers carry images of Rama’s former Interior Minister Saimir Tahiri, who is being investigated for suspicion of conspiracy with international cannabis smugglers. Rama says that through the demonstrations, the opposition is trying to create an artificial crisis in order to prevent negotiations on an Albanian EU membership from being opened.