The population is estimated at over 1 billion (2010); the continent is sparsely populated with 27 acre per km2, but the figure covers considerable regional variations. The vast desert and semi-desert areas have a population density of less than 1 resident per km2, which also applies to the rainforest areas of central Africa. By contrast, the population density is almost 1,000 in the river basin around the lower Nile River. Nearly populated areas are also found along the Mediterranean coast, on the West African coast, in the Ethiopian highlands, on Lake Victoria and on the East African coast. In South Africa, the density is particularly high in Transvaal’s industrial and mining region.

Slave trade, epidemics and gross exploitation of the African population in the period 1650-1850 caused a decline or stagnation in the population. In the following 100 years, the population is believed to have doubled, and after 1940 it has continued to grow. The death rate (number of deaths per year per 1000 persons) has been decreasing, but is generally higher than in other countries. The explanation for the large population growth is therefore the large number of births.

In the 1980’s, population growth was approx. 3.1% a year, which is more than almost anywhere else in the world. The growth of the economy and food production was considerably less. Measured per For instance, the latter fell by 6% over the decade. This has led to supply insecurity and deteriorating nutritional conditions. Thus, in 1992, 28 million. school-age children malnourished in sub-Saharan Africa. It is also reflected in a low average age, 54 years (2005) and in a high child mortality rate: Out of 1000 births, 107 die during the first year of life.

In the 1970’s and 1980’s, a number of famine disasters hit the continent, especially Ethiopia, Somalia and Mozambique. These disasters are closely linked to civil wars in these areas, but can also be explained by a production that is increasingly out of ecological balance. One consequence has been large streams of refugees against cities or across borders. Just bringing the peoples back to their native areas and restoring production are tasks that African countries will not be able to solve without long-standing assistance from the countries.

Children and adolescents make up 45% of the population (1990). This puts great strain on the education sector and, especially in the cities, leads to underemployment and unemployment. 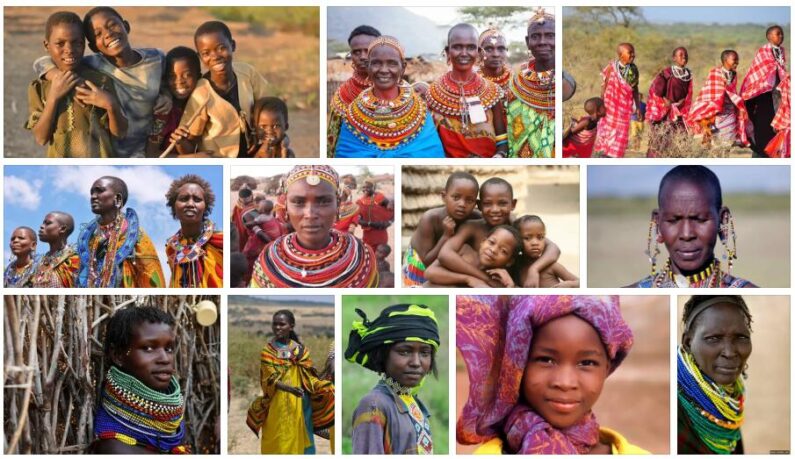 Only a third of the population lives in cities, and the urban population has grown strongly since 1960. However, there are large differences between countries. Although Africa is less urbanized than the other continents, there have been important urban formations far back in time. 7,000 years ago, cities around the lower Nile River existed, and 800-900 years ago, caravan trade across the Sahara created a foundation for cities such as Kairouan, Biskra and Marrakesh in the north and Timbuktu, Gao and Kano in the West African savanna region on the other side of the desert. In East Africa, during the same period, Mombasa and Mogadishu emerged like Arab trading cities. European colonization led to the rise of many coastal cities, and in the late 1800’s. a number of administrative cities were formed on the continent.

The colonization led to a great need for manpower for the construction of roads and railways and for work in plantations and mines. To force Africans into these tasks, taxes or direct forced labor were introduced. Thus the migrant work was founded; it is still widespread and especially includes men who, for short or long periods, leave the family to work in the city, on plantations or in mines. This is widespread in both West and South Africa as well as in North Africa, and migrations often occur across national borders. Income from this plays a major role for the family, and in some countries (Lesotho and Mozambique) they have at times been crucial to the national economy.

Violent urban growth also has a background in the development policy of many African countries according to COUNTRYAAH. Often, the urban industries have been favored at the expense of agriculture, and the location of education and health centers has also attracted the rural population. The influx has been such that slum areas on the outskirts of metropolitan areas have grown uncontrollably. Unemployment and underemployment are widespread, and opportunities for formal wage work are few. The majority of employees are in the informal sector, which is still growing rapidly. The pronounced poverty is reflected by a significant crime, a large number of beggars, prostitutes and others.

The emigration from Africa was in the 1900’s. not great, but seems to be compounded by the economic and ecological crisis on the continent. The relocations among African countries are predominantly aimed at the old colonial powers; the vast majority of Africans in Europe are Moroccan and Algerian foreign workers in France and Spain – many of them illegally immigrated.